Posted by Chris on December 27, 2011
I'm starting to play with the new toys bought for Christmas. My lovely wife bought me an Archos 48 as a replacement for our recently-deceased iPod Classic 160GB. Sporting a very clear 4.8 inch screen, it's described as an 'internet tablet' and comes with WiFi, an internet browser, email capability and various apps (à la iPod Touch). But for me it has just one purpose: it is a portable music player with a huge 500GB capacity. It can take our entire music collection of about 45,000 tracks (about 350GB) and will play the FLAC files which I'm increasingly using instead of MP3s. 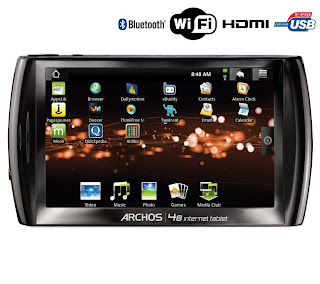 Installing it was a bit tricky thanks to an incompatibility between the 64-bit version of Windows 7 and the Archos firmware but with a bit of Googling I sorted out the problems (yes, all three of them). Then I successfully loaded our entire music library onto it in about 15 hours, about 23GB per hour (or about 6MB per second), which I think was a fairly respectable speed.

The Android operating system admittedly isn't as slick or crash-proof as the iPod's but it's easy to use and the music library function is fast. The sound quality is excellent and the Archos is truly portable (being about the size of a satnav) so we can take our entire music collection with us to work or when we go away for a weekend. And as a bonus we can do some surfing, listen to internet radio or watch a video too.

I can't really comment on how it performs as a full internet tablet. Android fans will complain that it only runs version 1.6 (Donut) and doesn't have proper access to the Android Market for more apps, while Apple fans will say it's not as elegant as an iPod or an iPad. All of which is true. But as a large capacity portable music player it's a good choice and at £50 cheaper than the 160GB iPod it's good value too.
Music Technology