iPad and the Wired Magazine App

Posted by Chris on December 20, 2011
We got an iPad2 back in the summer after much dithering. They're not cheap and can't really be described as a need. As one reviewer put it, an iPad doesn't replace a laptop; it's a glamorous companion for a laptop. And we were a bit worried about getting trapped in Apple's 'walled garden': you don't really have control over the content and rely on Apple and the app vendors just getting it right. And when you've spent almost 30 years using PCs you assume that you can't rely on that. 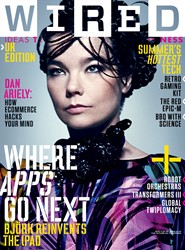 But, as so many people say about Apple products, "It just works". And it does. After a few days playing around with the iPad you almost forget that it's a computer. Instead, you can focus entirely on the content, just like you do when you read a book or watch a film.

Some apps really show off the iPad's potential and one of the best is the Wired magazine app. The printed edition of Wired is always brightly coloured with imaginative graphics and great photography. This transfers perfectly to the iPad's stunning screen. But they've done so much more. There are animations which show how mechanical things work. There are interactive graphics which explain data so much better than a printed graph. There are embedded videos where the author of an article talks you through a particular topic.

The app is free and once you've installed it you can download a free version of each month's issue. And if you want the entire issue you can pay for it and then download it. Given the degree of complexity, the downloads are quite quick and take just a few minutes on our slow (under 4Mbps), rural broadband.

This short video shows off some of the app's best features.