This week included a notable date: the end of our 18 month mobile phone contract and therefore the time when we can upgrade to the latest feature-packed phones. And how they have developed in the past 18 months. We thought our old phones - Blackberry 8900s - were good but recently Blackberry seems to be lagging behind other platforms. The basic designs haven't really changed much and the number of apps is limited. And recently our web browsing had become so slow as to be unusable. Accessing emails on the go - an important feature for us as we're not tethered to a desk - used to be unique to Blackberry but not any more.

But what instead? iPhones are lovely but paying something like £60 per month (each) is serious money. And everyone we know who has one says "They're good but..." So after some research we chose Android as the platform and, after a bit of hands-on playing in Carphone Warehouse, the Samsung Galaxy W as the preferred handset.

The Galaxy W seems just right for us. It has a sharp, mid-sized screen (3.7-inch) and runs the latest version of Android (2.3.5 'Gingerbread'). With a fast 1.4 GHz processor it doesn't hang around.

One of the best features is the phone's ability to act as a wireless hotspot. In other words, wi-fi enabled devices can connect to the internet through the phone. This was the critical feature which helped us decide. Why? We had also been thinking about getting a tablet, to give us internet access whilst out and about. A friend of ours, Bernie, recently showed us her HTC Flyer, connected over the 3 network, and it was very impressive - fast internet connection and a 'near-laptop' experience with a 7-inch screen. Web browsing on phones is OK in short bursts but you can't beat a proper-sized screen for the full experience, especially as websites become ever more elaborate. 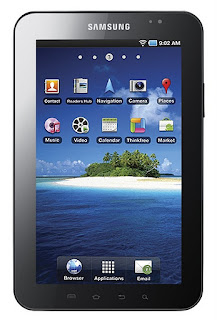 But then common sense intervened. A Flyer (or similar) connected to T-Mobile would cost over £30 per month, on top of the mobile phone bill. Or the pay-as-you-go route would mean paying something like £600 for a 3G Flyer. This seemed a bit steep, given the 'not strictly necessary' nature of a tablet.

This is where the Galaxy W's wireless hotspot feature comes in. Why spend additional money on a monthly contract for a tablet? Why not buy a wi-fi-only version and connect through the phone? The only downside seemed to be the risk of draining the phone's battery but we're unlikely to connect for very long periods of time.

Then, to seal the decision, fate intervened. While we were browsing phones in Carphone Warehouse I noticed that they had reduced the price on a number of tablets. The wi-fi-only version of the Samsung Galaxy Tab 7-inch seemed ideal and, reduced to £200, a good price. Running Android 2.2 ('Froyo') it's more than fine for a bit of surfing in Starbucks - so a pair were duly purchased.
Technology