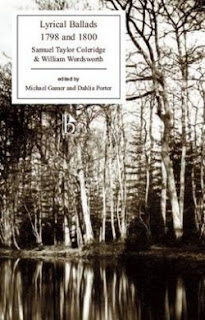 ... all good poetry is the spontaneous overflow of powerful feelings. (Preface to Lyrical Ballads, 1802).

Chris and I decided that we would spend some time reading Coleridge and Wordsworth's Lyrical Ballads. So far we have read about half of the poems and have concentrated on the 1800 edition. Reading the poems out loud makes such a difference and means that I'm appreciating them all over again as well as truly appreciating the music of the poetry. Chris is loving the poems and I am enjoying getting a fresh perspective on this very important work.

Reading the poems and thinking about how they revolutionised poetry - how it's written and read as well as who reads it and writes it - is very special. Lyrical Ballads changed the face of English poetry and provided inspiration for many later writers and poets including Thomas Hardy, Gerard Manley Hopkins and Edward Thomas.

As well as reading the poems we are planning a trip to Nether Stowey when we visit Somerset later in April. It will be wonderful to visit the places which inspired the poets. Following our weekend in Bath and Somerset we will travel home through Wales and stop at Tintern Abbey as well as following the River Wye to Hay-on-Wye. It is magical to visit the places which provided inspiration for favourite poems and a treat to visit locations which provided inspiration outside the Lake District.

What appeals to me most about Lyrical Ballads is that they were written for the ordinary person and described common life incidents in language which is comprehensible and simple.

"The principal object was to chuse incidents and situations from common life, and to relate or describe them, throughout, as far as was possible, in a selection of language really used by men." (Preface to Lyrical Ballads, 1802).

Whilst I love both Coleridge and Wordsworth, I think it is Tintern Abbey which always moves me most from Lyrical Ballads and which, for me, presages Wordsworth's later works. He starts to explore the themes of tranquility and inspiration in nature, imagination and memory which make his later poetry so beautiful.

...Though absent long,
These forms of beauty have not been to me,
As is a landscape to a blind man's eye:
But oft, in lonely rooms, and mid the din
Of towns and cities, I have owed to them,
In hours of weariness, sensations sweet,
Felt in the blood, and felt along the heart,
And passing even into my purer mind
With tranquil restoration...
Books