Posted by Chris on July 17, 2012
The Raspberry Pi which I ordered in March arrived a couple of weeks ago and it was definitely worth the wait. The Pi is a single board computer, about the size of a credit card, which retails for $35 and was designed from scratch to meet a very specific need. 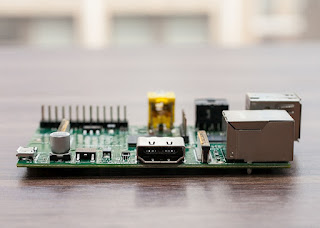 A group of boffins at Cambridge University's Computer Laboratory noticed, to their dismay, that kids aren't really being taught how to program computers any more. More and more of the A level students who applied to read Computer Science were experienced at using computers - Word, Excel and perhaps a little web design - but not at programming them. The boffins remembered that in the 1980s and 1990s most applicants were keen hobby programmers, having used a BBC Micro or Sinclair ZX in their school lessons and at home. Even early versions of Windows came with a BASIC interpreter for a little ad hoc programming.

Yet it is programmers that we need. So they decided to design, from scratch, a simple computer which boots into a programming environment. And after several years of prototyping, the Pi was born - along with the Raspberry Pi Foundation, the charity which the boffins established to promote and distribute the computer.

It's certainly simple. A single board which boots from an SD card, it has all the connections you could need: 2 USB ports for keyboard, mouse or external hard drive; HDMI to connect to your TV or monitor; 3.5mm audio jack; and an ethernet connection for networking. It will boot into a Linux environment and there are several versions available. 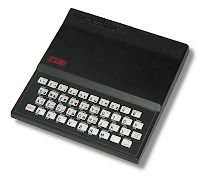 Once it's up and running it's quite impressive. The processor runs at 700MHz and the on-board graphics processor handles 1080p playback at 30fps. But the real point of it is that, for $35, you get a proper programming environment.

What will I do with it? I'm not sure. New ideas emerge every day on the Pi website and too many of them appeal. For now, I'm happy to boot into Linux and tinker around until it's all a bit more familiar. It reminds me of my Sinclair ZX81 all those years ago...
Technology