Posted by Anonymous on July 31, 2012
We had a couple of nights in Bath last weekend and enjoyed a performance of Sheridan's The School for Scandal at the Theatre Royal. It was a stunning performance and we all thoroughly enjoyed ourselves. 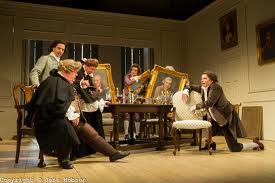 The School For Scandal is a romp through the lives and loves of the upper classes in the fashionable society of 18th century London. Sir Peter Teazle has married a young country girl in the hope that she will be too innocent to cause him any bother, but his aims are thwarted when she takes up with the most outrageous set of scandalmongers in town; Lady Sneerwell, Mrs Candour and Sir Benjamin Backbite thrive on making mayhem from malicious tittle-tattle. Add into the equation the notorious playboy Charles Surface, his brother Joseph, an apparently honourable gentleman, Sir Peter’s ward, the gossip-loathing Maria with whom both brothers are in love, and an array of servants both upright and downright wicked. This classic English comedy of manners relishes every opportunity to poke fun at the society in which it is set. 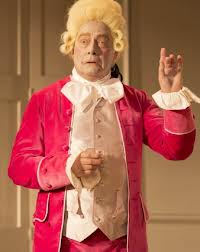 The production was fabulous, with a great set and wondeful costumes - the pink and lilac velvet suits were heavenly - I want one of each! The cast was amazing - every word was so clear that we didn't miss anything. They also kept up a rattling pace so there was no time for boredom or ennui!

The picture scene where Charles Surface unwittingly sells off his family portraits to Sir Oliver - his Uncle - was so witty and fast. But, and there's a moral here, he refused to sell the portrait of Uncle Oliver - so, clearly he is the better brother and succeeds in securing his Uncle's fortune. His brother, Joseph, is exposed as a hypocrite and this is confirmed during the wonderful screen scene! Lady Teazle played up wonderfully during this scene - fantastic!

All in all a very entertaining evening, confirming the Theatre Royal as a premier venue for theatrical events. We've already booked for The Ladykillers and Fascinating Aida in October. Before then, however, we have The Country Wife at the Royal Exchange in Manchester to look forward to.
Theatre