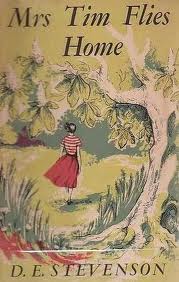 I have enjoyed D E Stevenson novels since I discovered her as a teenager. When I first started reading her books they were hard to find and each novel was greeted as a big discovery. Back in the 1980s there was no Abe, no EBay or Amazon and the only way to find her books was to search every second hand bookshop in every town or city. My first significant haul of hardback editions was in Ewan Kerr's bookshop in Kendal. It was so exciting. Since then, I have collected all her books - all in hardback and all with dustwrappers. They are just so very pretty! 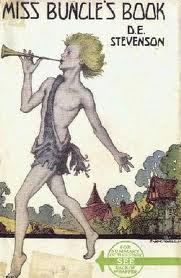 I'm never sure which of Stevenson's books I like best. I love her light, frothy novels - all of the Mrs Tim novels. Miss Bucle's Book and Miss Buncle, Married; The Four Graces and Anna and her Daughters. But I also love her more thougtful and thought provoking novels, especially The English Air.

I've read many books about the years and months leading up to the Second World War but I don't think any novel has made me think more about the futility of the conflict than Stevenson's novel. She describes so poignantly the relationship between the half German, and initially all Nazi, Franz, and his English family. He arrives in England as a spy, living with and completely misunderstanding and underestimating, his English family. Over the course of his visit he comes to understand the British psyche and, as he falls in love with his cousin, Wynne, he starts to question his indoctrination with Nazi ideals. He learns to love England.

I'm so pleased that Stevenson is being republished and introduced to a new audience. She's an author who deserves to be read and appreciated. I love the new edition of Miss Buncle's Book published by Persephone and I'm absolutely delighted and thrilled that Shirley at Greyladies has published, for the first time, three new books which had languished in Stevenson's family home for more than fifty years. They are all such a treat.

I think that many readers underestimate D E Stevenson and label her books as "nice". They are certainly nice but there is also a lot of depth to her characters, their situations and the novels in general. There is a great deal more subtlety to her books than at first appears.
.
Books