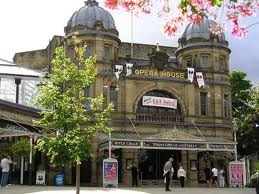 The Gilbert and Sullivan Festival is, once again, in full swing in Buxton. This year my Gilbert and Sullivan chum, Bernie, and I, have booked to see The Gondoliers, The Grand Duke and HMS Pinafore. Whilst I have seen The Gondoliers and HMS Pinafore many, many times, I have never seen The Grand Duke before so I am especially looking forward to this performance.

On Saturday, however, we enjoyed The Gondoliers performed by the Gilbert and Sullivan Opera Company. They performed to a packed, and enthusiastic, auditorium.   It was a fantastic and spirited performance. The Opera House was so full that we were only able to secure seats in the Upper Circle, even though Bernie had booked the tickets many months ago. I particularly enjoyed this performance and, I think, The Gondoliers has now become one of my favourite Gilbert and Sullivan operas. Both Bernie and I commented that we hadn't realised how many songs we love are from the opera. 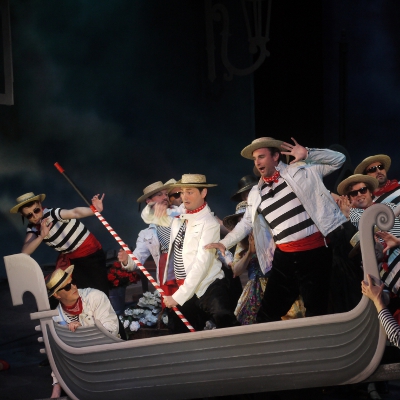 Whilst the whole Company was great, there were a number of outstanding performances including the Duke of Plaza - Toro, an impencunious grandee of Spain's nobility; the Gondoliers - Marco and Guiseppe; and their wives - Gianetta and Tessa. The only slight discordant note was the wives' West Country accents which jarred slightly and were at odds with the Venetian setting. I'm not quite sure why the producer chose this particular accent for the young ladies but it was distinctly odd, but not odd enough to detract from excellent performances.

I love the topsy-turvy world of Gilbert and Sullivan and The Gondoliers is one of the best examples of this element of their work. The story of "The Gondoliers", which satirizes snobbery in all grades of society, follows Gilbert's favourite theme of topsy-turvydom. "I am told", said he, "that the public like the topsy-turvy best, so this time they are going to get it". And we certainly do!

So, roll on the next G & S fix in two weeks time - a matinee of The Grand Duke followed by an evening performance of HMS Pinafore, bliss!
Music Theatre