Posted by Anonymous on September 14, 2012
I love the Buxton Gilbert and Sullivan Festival and I always try and see a couple of  performances with my mate Bernie. This year, as well as The Gondoliers, we managed two performances in one day. In the evening we saw HMS Pinafore, and the matinee performance was The Grand Duke. Both were wonderful, but as I have never seen the Grand Duke before, it was very exciting.

Apart from a concert version produced by D'Oyly Carte Opera Company in the mid-seventies and a handful of amateur productions, Gilbert and Sullivan's final operetta, The Grand Duke, has not been seen in a fully staged professional production in the UK since the original production in 1896. Gilbert himself certainly didn’t rate his libretto: “an ugly misshapen little brat” is how he disparaged it to a friend. Sullivan complained: “Another week’s rehearsal with WSG and I should have gone raving mad. 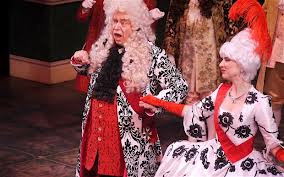 In the Grand Duchy of Pfennig Halbpfennig, the theatrical troupe of Ernest Dummkopf is plotting a conspiracy to overthrow the tyrannical Grand Duke Rudolph. Ludwig, the troupe's leading comedian, fights a number of "statutory duels" and finds himself taking the place and the title of the Grand Duke...but when legions of women arrive to claim Ludwig in marriage to become his Grand Duchess, including an indignant leading lady, an enormously wealthy old battleaxe, and even the Princess of Monte Carlo, how will matters resolve themselves?

With the aid of an eclectic array of travelling players and aristocrats, four weddings and enough sausage rolls to last several lifetimes, Gilbert and Sullivan's final 'Savoy Opera' is full of Topsy Turvy paradoxes, legal conundrums and absurdities of etiquette. Far more than just a historical curiosity, The Grand Duke displays a much sharper satirical edge than any of Gilbert and Sullivan's other works.