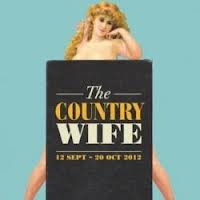 The Royal Exchange is currently staging an excellent performance of William Wycherley's The Country Wife and we enjoyed a matinee performance last Saturday.

I love Restoration comedies and there aren't many opportunities to see excellent performances. Over the past couple of years, however, there have been a number of performances of some of the most popular plays including Wycherley's The Country Wife, William Congreve's The Way of the World and George Farquhar's The Recruiting Officer. I've seen, and enjoyed, all of them but, as The Country Wife.has always been one of my favourite plays, I was especially looking forward to the performance. I wasn't disappointed!

The actors gave a fantastically spirited performance and they left the audience in no doubt of the main themes of the play - Horner's impotence trick, the married life of Pinchwife and his new (country) wife, Margery, and the courtship of Harcourt and Alithea. We had some Spanish students sitting behind us and, whilst they were struggling with some of the language, they completely got the innuendo, sexual references and the main "thrust" of the plot. The cornerstone of the play is Horner's ruse of impotence. This proves to be a great success, and he has sex with many ladies of virtuous reputation. The ladies of the play are desperate to enjoy themselves with Horner and their husbands, believeing him to be a eunuch and impotent, are only too happy for them to be alone with him.

The courtship of Harcourt and Alithea is a conventional love story, By means of persistence and true love, the witty Harcourt, Horner's friend, wins the hand of Pinchwife's sister Alithea, who is when the play opens engaged to the shallow fop Sparkish. The delay mechanism of this story is that the upright Alithea holds fast virtuously to her engagement to Sparkish, even while his stupid and cynical character unfolds to her. It is only after Alithea has been caught in a misleadingly compromising situation with Horner, and Sparkish has doubted her virtue while Harcourt has not, that she finally admits her love for Harcourt.

We had a wonderful afternoon and followed the performance with a lovely Chinese meal at the Little Yang Sing, our favourite Chinese restaurant in China Town.