Posted by Chris on October 19, 2012
Not far from our village is an iconic motorway service area on the M6. Forton Services (recently renamed Lancaster Services) is unique in having a high level tower, originally designed as a restaurant affording diners panormaic views over the Bowland fells to the east and Morecambe Bay to the west.

Now English Heritage has recognised the architectural importance of the tower building by granting it Grade II Listed status. Forton Services (or 'Forton Motor Port' as it was originally called) opened in 1965 at the same time as the Preston to Lancaster stretch of the M6 and the 'Pennine Tower Restaurant' restaurant was the main attraction. 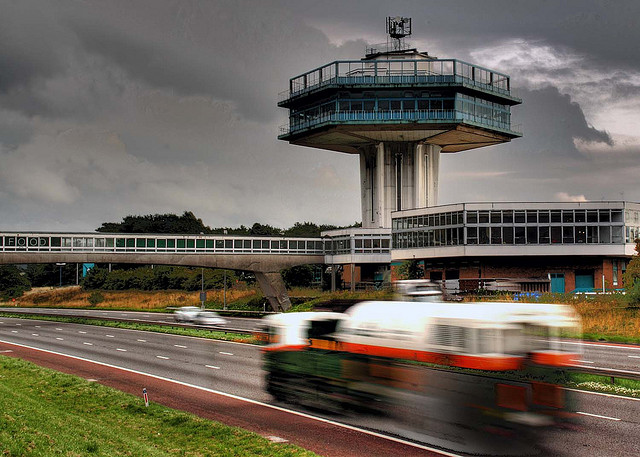 Very glamorous in its heyday, with waitress service and fine dining, it became the place to go and there are accounts of the Beatles travelling the 70 miles from Liverpool several times to enoy the sophisticated dining experience set above the speeding vehicles. Motorways still had novelty value and many people travelled from nearby Preston, Lancaster and Blackpool for the evening just to enjoy a good meal at the restaurant as well as an exciting drive on the motorway which at that time had no speed limit.

The tower has now been closed for several years as it does not meet modern fire regulations. But it is still as iconic and it is good to see it recognised and protected as a noteworthy building.
Places