Posted by Chris on March 23, 2013
We have spent the first few days of Spring under a blanket of drifting snow with gale force icy winds. According to the BBC weather site, the same time in 2012 we were basking in 17 degrees. Having spent Friday in the house we felt we had to go out today to avoid cabin fever. 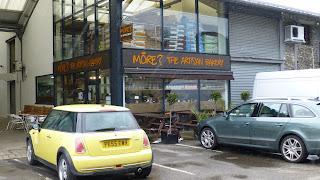 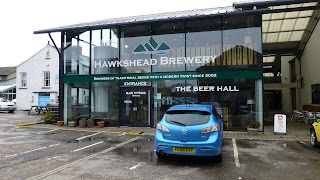 Oddly, as soon as we headed north evidence of snow disappeared and for a few miles everything seemed normal. We stopped off at our favourite artisan bakery, More? at Staveley, where a foodie cluster has developed. Next to More? is Hawkshead Brewery which was established about 10 years ago near Hawkshead village by ex-BBC foreign correspondent Alex Brodie. Having been quite a success, the brewery moved to new premises in Staveley and added a German-style Beer Hall where you can sample the ales. And if you wish you can take a drink next door to Wilf's Café and enjoy it with some of their delicious food.

Leaving Staveley we headed towards the Lakes - and the weather soon changed. Snow was on the ground with some drifts across the road and by the time we reached Grasmere there was several inches in places. And it had started lightly snowing. We didn't want to just turn round and drive home again so we had a bite of lunch and then a quick trolley-dash in Sam Read book shop.

We got home to be greeted with a bit more snow drifting against the house, some of which had helpfully melted and then re-frozen as ice. Once inside we lit the stove and enjoyed our artisan bread with some good cheese and the Saturday papers.
Places