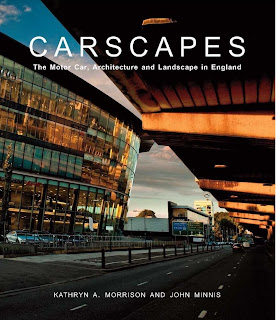 Lindsey bought me this fascinating book a few weeks ago and I've been captivated ever since. It is a large format (roughly A4) book, sumptiously illustrated with photographs from English Heritage's archive, which takes the reader through the history of the motor car and in particular its effect on our society and architecture.

Written by two architectural historians, this isn't a book for petrol-heads: there is hardly any technical information about cars. Instead the book opens our eyes to the huge impact that the car has had on the appearance of our towns and countryside since it first arrived in the late 19th century. There are chapters on every aspect of this including car factories, car parks, sales showrooms, petrol stations, roads and motorway services - none of this architecture would exist without the car.

The 1920s and 30s saw attempts to make the car blend in. So, for example, petrol stations were often designed with a pitched roof above the pumps, echoing the roofs of nearby houses or bungalows. Car parks were often made to look like stylish offices blocks.


This is a theme that runs through the entire book, and which ran through 20th century England. Do we love the car or hate it? Should it blend in or stand out? Traditional or modern?

In post-war England car ownership was still relatively low but for the lucky minority the car represented the freedom of the open road, individualism and hope. The sometimes fanciful images associated with advertising were exotic and luxurious but the architecture was often Brutalist.

A fascinating perspective and a highly recommended book.