Posted by Chris on April 20, 2013
Yet another miracle of modern technology!

An Eye-Fi card is a standard Class 6 SD card, for use in camera - but within the tiny card is also a wi-fi chip and antenna along with an ARM processor running at 200 MHz. The basic idea is that when you return home having taken some photos, you switch on your camera at which point the Eye-Fi detects your wireless network and automatically uploads your photos to your computer. 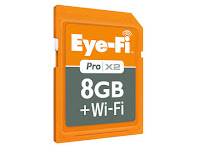 I agree that this sounds a bit of a 'nice to have'. After all, how hard is it to connect your camera to your PC with a cable and upload photos the old fashioned way? But the cards have dropped in price a bit recently and I found a bargain on eBay so I thought I'd give it a go. I'm glad I did.

The basic job of uploading photos wirelessly from camera to computer is done automatically and perfectly every time. You specify the computer and file location and Eye-Fi does the rest. Having used the card for a few weeks I now can't imagine going back to connecting a cable and manually dragging the photos from one window to another. I was especially impressed with the range. Despite having a tiny antenna and being inside a camera - with some metal around it - the card had no problem making a strong connection to our wireless network. The 24 megapixel photos uploaded in seconds.

The 8GB capacity is large enough for several hundred photos but isn't massive by today's standards. To help with this the Eye-Fi helpfully deletes files which you have successfully uploaded to your computer, so the card never fills up. This would be especially useful when going away for a few days (or longer) and periodically uploading at an internet café.

But the eye-Fi card also has a number of other tricks up its sleeve which have made it absolutely indispensable for me.

The software which accompanies the card opens an account for you 'in the cloud' which gives additional functionality. One of the most useful features is that, in addition to uploading photos from your camera to your computer, you can also automatically upload them to one of the many web-based photo hosting services. I use Picasa, but Flickr, Facebook and a large number of other services are also supported.

A nice touch is that you can also ask Eye-Fi to resize each photo before uploading it: you probably won't want to upload huge 24 megapixel photos if they are only going to be viewed on a 1650 x 1080 (or smaller) display. The resizing also significantly reduces upload time - especially useful if you are uploading via a wireless hotspot while away from home.

I had been pondering for some time if there was a way to easily upload photos taken on my Android phone to a web-based photo service, so that I could then include them in blog posts. Some Googling revealed that people have developed various methods for doing this but none of them seemed simple. Ideally I was looking for a fully automated solution. The Eye-Fi account does this too.

As well as your new Eye-Fi card in your camera, you can also add a number of other camera devices such as a smart phones or tablets to your account. Once you've loaded the Eye-Fi app onto those devices, they behave as if they have an Eye-Fi card inside. And because they have a mobile data connection, you don't have to wait until you get home to upload the photos: they are uploaded as soon as you take them, wherever you are.

This makes the Eye-Fi card a perfect solution for mobile blogging. Take some photos, upload them over the mobile phone network to Picasa, then compose your blog post - including the (resized) versions of the photos. And all without switching on a computer.

So is the Eye-Fi card worth the money? After all, an ordinary 8GB SD card is about £5 while an 8GB Eye-Fi card is ten times that price. For me the answer is a definite Yes. Which is why I bought a second one for my compact camera.
Technology