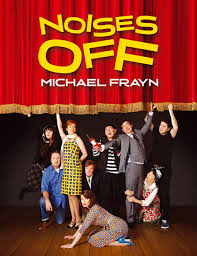 What a wonderful evening! Last Friday we all went to the Lowry Theatre at Salford Quays to see Michael Frayn's Noises Off!

My sister and brother-in-law had already seen it at the Theatre Royal in Bath and had raved about it. So, when the chance came to see it at the Lowry we all decided  to give it another go! I'm really glad that we did! 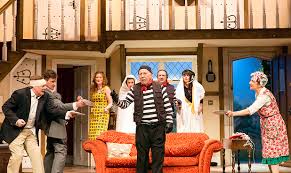 It was a fabulous evening. The play was staged in three acts. Two of the acts showed the actors on the play's set but for the second act the set was turned around and we saw the set from behind. We witnessed the actors as they prepared to go on stage and  we saw how they were interacting with each other off stage. 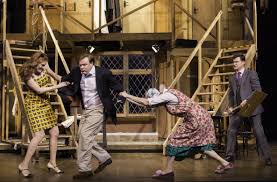 This multi-award-winning backstage farce serves up a riotous double bill – a play within a play. Hurtling along at breakneck speed it follows the backstage antics of a touring theatre company as they stumble their way through rehearsals in Weston-super-Mare, to a shambolic Wednesday matinee in Ashton-under-Lyne, and a final disastrous performance in Stockton-on-Tees.

We all laughed and laughed! I loved the episode where one character tied another's shoe laces together and he fell down the stairs and at the end of the play there where three burglars on the set as the producer was concerned that the original actor would be drunk and not turn up at the critical moment!

What a brilliant play! Noises Off! is hailed as one of the greatest British comedies ever written.
Theatre