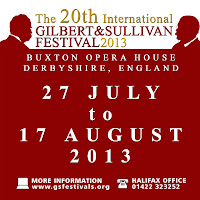 It's that time of year again! August means just one thing: the International Gilbert and Sullivan Festival at Buxton Opera House. I can scarcely believe that this is the Festival's 20th year! Bernie and I went to the very first Festival; I think we saw Pirates of Penzance, and then I missed a few years and started again about 10 years ago. Since then, we have enjoyed the Festival every year and it's become an annual ritual!

Each year we make our selection from all the fabulous shows and sometimes we choose the unusual operas which aren't performed very often: Utopia Ltd, the Grand Duke and the Sorcerer, but this year we decided to see some of our old favourites. 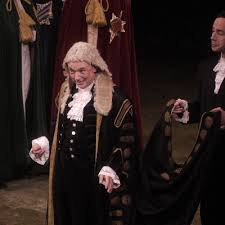 It's a wonderful opportunity to cram as many G and S activities and performances as possible into three glorious weeks in August. This year we are booked to see five performances: Iolanthe, Ruddigore, Trial by Jury, The Zoo and Princess Ida.

The first performance was the Gilbert and Sullivan Opera Company performing Iolanthe. I love this opera. It's light and witty and the music is wonderful. Bernie and I can never make up our minds which is our favourite G and S opera. Iolanthe is certainly close to the top of the list, if not at the top of the list. This performance was excellent and certainly nudged Iolanthe closer to the number one position!

All the cast gave excellent perfomances but the fairies, Iolanthe, the Lord Chancellor and Strephon were fantastic. Comedy was best found in the gentlemen of the chorus, gloriously over the top as dim-witted hereditary Peers of the House of Lords. 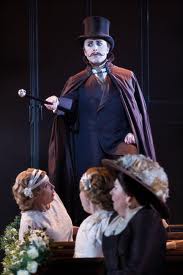 Iolanthe has some of the wittiest lines in Gilbert's repertoire. We revelled in such beauties as "he's a fairy down to the waist, but his legs are mortal" and“whenever I see you kissing a very young lady, I shall know it’s an elderly relative.” Bliss!

The following weekend we enjoyed a triple bill! Ruddigore, Trial by Jury and the Zoo. I love Ruddigore, especially the second half, where the mood is darker than most Gilbert and Sullivan operas.

The opera also includes and parodies elements of melodrama, but Gilbert, in his customary topsy-turvy fashion, turns the moral absolutes of melodrama upside down: the hero becomes evil, the villian becomes good, and the virtuous maiden changes fiances at the drop of a hat. The ghosts come back to life, foiling the curse, and all ends happily.

The music of Ruddigore is fabulous and I love the scene where the ghosts step down from their picture frames and come to life to berate Sir Ruthven Murgatroyd.

Trial by Jury and the Zoo were good but Ruddigore was a hard act to follow. Next weekend it's Princess Ida, excited already.......

And so, on Saturday we enjoyed Princess Ida performed by the Gilbert and Sullivan Opera Company. It was, quite simply, an absolutley stupendous show!

Princess Ida isn't performed very often so it's easy to forget how many wonderful songs there are in the libretto. The music is also fantastic. We were singing along almost from the beginning!

"Princess Ida", a respectful perversion, as Gilbert called it, of Tennyson's poem, "The Princess," is a simple tale of two kings and the son of one of them and the daughter of the other. The opera satirizes feminism. women's education and Darwinian evolution, which were controvrsial in conservative Victorian England.

It was a wonderful finale to the 20th Gilbert and Sullivan Festival and a thoroughly enjoyable three weeks it's been.
Music Theatre