Posted by Anonymous on August 05, 2013
Shakespeare's King Lear is a vast, complicated story of love and hate, revenge and overwheening pride, greed and envy, foolishness and fate. It is one of my favourite Shakespeare plays and it doesn't matter how many times I see the play, it always feels fresh and new and shocking.

The plot is straightforward: the ageing King Lear rewards his two oldest daughters with his kingdom when they flatter him with false praise. 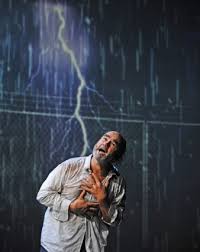 Sir, I love you more than words can wield the matter;
Dearer than eyesight, space, and liberty;
Beyond what can be valued, rich or rare;
No less than life, with grace, health, beauty, honour;
As much as child e'er lov'd, or father found;
A love that makes breath poor, and speech unable.
Beyond all manner of so much I love you

But his youngest daughter, Cordelia, confesses simply to love him and is banished.

Unhappy that I am, I cannot heave
My heart into my mouth. I love your Majesty
According to my bond; no more nor less.

Too late to realise his mistake, and forced from power by his offspring, an increasingly impotent and frail Lear descends into madness.

It's truly stirring stuff and the subplot of Gloucester and his two sons, the  legitimate Edgar and the illegitimate Edmund, provides an excellent foil to the main plot of Lear and his daughters.

The production we saw at the Theatre Royal in Bath was stupendous. The action was moved  into the 1960's London Gangland. All the performances were excellent but the evening will chiefly be remembered for Haig’s Lear. He heart-catchingly conveys the character’s fear of madness and his reconciliation with Cordelia and his desolation at the play’s bitter end are blessed with an extraordinary depth of humanity and emotional truth.
Theatre