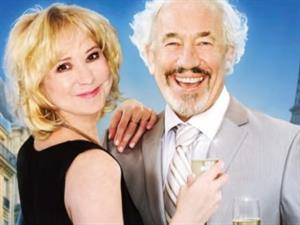 Over the past few years we have enjoyed many performances at the Theatre Royal in Bath and last weekend we visited Bath for a spot of shopping, sightseeing and a trip to the theatre to see Tchin, Tchin.


Tchin, Tchin is a 1959 play written by Francois Billetdoux and set in 1950s Paris. The play centres around Pamela and Cesario when they discover that their respective spouses are having an affair. They meet up to support each other and share what they know about the affair.  The initially priggish English lady is slowly seduced by the vibrant Italian. Unfortunately, his joie-de-vivre is mainly due to alcohol and she too becomes dependent on it, starting a decline and fall.

Felicity Kendal and Simon Callow starred as Pamela and Cesario and they acted their parts brilliantly. The play should have been good but we didn't enjoy it at all. We found it vaguely depressing and unsettling. The actors sparkled and worked their magic; they acted brilliantly and the sets were great but..... it just didn't work for us.

During the interval Chris likened the play to Waiting for Godot and I think he was right. It reminded me too much of how fragile life is, how prone to collapse and how disaster can be just waiting around the corner. Not a good message for a fun weekend in Bath!