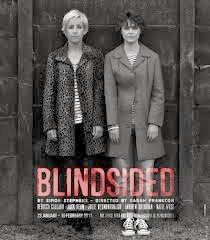 The Royal Exchange's current production is Simon Stephen's latest play Blindsided. Julie Hesmonhalgh, Corrie's Hayley Cropper, played one of the leading roles, Cathy's Mum, Susan, and ensured that the auditorium was packed. So much so that, even early in the run, we struggled to get seats.

We were glad that we did manage to see the play although it's something of a rollercoaster and not a play to be enjoyed but rather an experience which leaves the audience feeling perplexed and disturbed.

I'm not normally a fan of disturbing theatre, I prefer my theatre to be uplifting and exhilharting, Blindsided was definitely neither of these!

The play was bleak, set in Stockport of 1979, no coincidence that the play opens as Maggie Thatcher wins her first election and finishes in 1997 as 18 years of Conservative government comes to an end. The characters are hugely troubled and the the stage set bleak.

Anna Fleischle’s stark set, full of girders and hints of tower blocks, fits the mood - even if it does feel like watching a grim domestic drama unfold in an unlovely underpass. The flooding of the stage in the second half does nicely hammer home the sense that Cathy has built an island for herself. Her allegorical, quasi-religious ‘rebirth’, set to choral music, is probably Blindsided’s most powerful moment.

Blindsided is an unsettling experience. I certainly didn't love it but it did make me think and sometimes that's the role of theatre.
Theatre