I was surprised to find, when I opened one of my Christmas presents from a bibliophile friend, that we had exchanged the same book as presents to each other. The book in question was Jill Paton Walsh's novel, based on the characters and notebooks of Dorothy L Sayers, The Late Scholar. It's always strange when book tastes coincide so perfectly!

Lord Peter Wimsey was one of my early loves. I clearly remember watching the early, pre-Harriet, novels dramatised by the BBC in the 1970s. Lord Peter, back then, was played by Ian Charmichael and I fell in love with his brilliance and charm. Later in the 1980s he was portrayed, again for the BBC, by Edward Petherbridge, and a very different Wimsey emerged. These adaptations were Wimsey-with-Harriet and unlike the devil-may-care, insouciant Wimsey of Carmichael, Petherbridge played a romantic and alluring Lord Peter.

As I watched the BBC adaptations before I read the novels, the characters will always be flavoured with the actors portraying them. As an aside, I find this interesting in itself. Which comes first for the reader? The actor and then the character, or the character and then the actor? And which is better? Anne of Green Gables will always be Kim Braden for me. I find it hard to picture Anne in any other way and I'm certainly unable to watch any later adaptations. But Carmichael and Petherbridge perfectly portray the two sides of Peter's chararcter. The man about town and the lover and husband.

I realise that my early reading of the Dorothy L Sayers' novels focussed on Lord Peter with faithful Bunter and when reading the pre-Harriet novels I picture Ian Carmichael as Lord Peter. When I read the later novels, with Harriet, I clearly picture Harriet Walters and Edward Petherbridge in the main roles. None of this really matters except that it made me think how Peter changed after he had won and married Harriet. 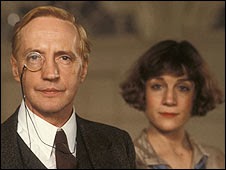 Here are the men themselves.

Anyway, back to the lastest offerings from Jill Paton Walsh. The Late Scholar is set in wartime Britain with the Wimsey family, the Bunters and various children of relatives, living at Tallboys, the house Peter bought for Harriet as a wedding gift. I absolutely loved it. JPW absolutely captures the atmosphere of a DLS novel and handles the chararcters so sensitively and well.

When I'd finished it I went on to read all three previous Wimsey novels written by JPW: The Attenbury Emeralds, Thrones, Dominations and A Presumption of Death. They were all fabulous. I wasn't surprised as I also love JPW's other crime novels featuring Imogen Quy.
Books