Sonnets at the English Lakes

Posted by Lindsey on March 16, 2014
Blelham Tarn
I know the dreamy quiet of the tomb,
Have sailed through aether's silences profound,
Wild rocks have climbed that listen for the sound
Of Echo and have never heard her come,
White wastes explored where words are frozen dumb,
And tropic plains; yet I have never found
For peace and rest such consecrated ground
As lies, dear tarn, about thy mountain home:
Scent from the sun brown hay-field thou dost gather,
Music from the reeds and humming breadths of Heather,
Swift-changing colour from the blushing skies,
When to her larches roost the ring dove flies;
From imaged hills their secrets thou dost borrow
To blossom into lilies on the morrow.

I've only recently discovered Canon Rawnsley's sonnets. His name has always been synonymous with the Lake District, Beatrix Potter and the National Trust but his sonnets had passed me by. They are so beautiful and not what I expected, although I now wonder what exactly I did expect. 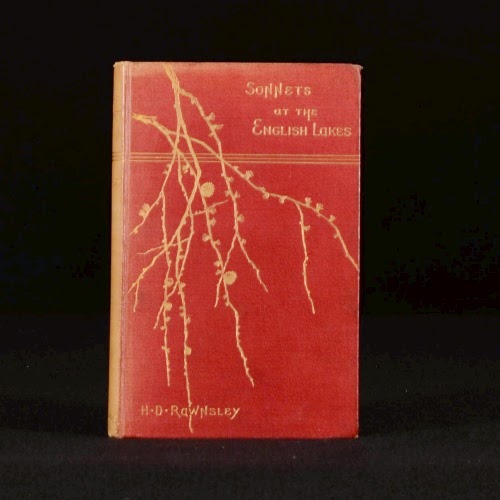 There are so many beautiful sonnets composed about places I love in the Lake District, and whilst I recognise that, as a poet, Rawnsley isn't in the same league as Wordsworth, he still achieves something really important for me. He writes about places, places I have visited and lived. He creates that moment of connection, of thinking 'I know where and what you're writing about, I've been there.' He makes a connection with the reader which spans the centuries and which brings the place he is writing about clearly into the mind's eye. When I read the Blelham Tarn sonnet I was reminded of our recent walk from Hawkshead to Wray Castle passing Blelham Tarn.

I can't stop reading his Sonnets at the the English Lakes. I've taken to carrying the book around with me to dip into wherever I am. Fortunately, it's only a slim volume and so pretty.Within it are sonnets to Latterbarrow, Claife Heights, Hawkshead Church, Esthwaite, I could go on and on....

Anyway, as it's March this is my current favourite sonnet:

Clear Weather in March
Season of Winter loveliness heightened
By day that earlier lives and later dies -
Season of sapphire waters, steady skies,
And yellowing larch, and copses bronzed and brightened
By hazel buds, and woodland glooms enlightened
By ash-shoots glancing grey, with ivories
Of white birch stems, and wings of jays and pies
At woodman's step from out the hollows frightened!
For thine exceeding clearness at the noon
Men love thee, March; but, at the time of even,
Such blushing azures front the saffron West,
Their eyes with choice of beauty are distrest;
While, arbitress above in middle Heaven,
In mutest indecision stands the Moon.
Books