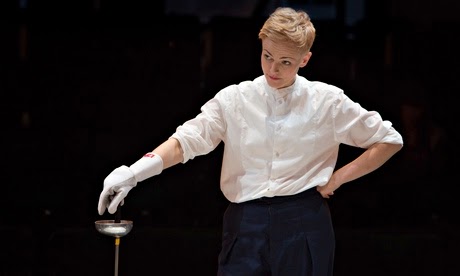 I rushed to book tickets to see Maxine Peake as Hamlet, at The Royal Exchange in Manchester, as soon as the tickets went on sale in the early Summer. I, quite correctly, assumed that tickets would sell out really quickly.

Both Chris and I were really excited. Neither of us has seen many adaptions of Hamlet. It's not a favourite Shakespeare play for either of us and, unusually, neither of us studied it for A level, where it is usually a perennial favourite! We hoped that Maxine Peake would work her magic and make us fall in love with the play!

Our reactions were mixed! Maxine was brilliant, how could she not be? But neither of us fell completely under the play's spell. I think that I enjoyed it more than Chris, but not a great deal more.

The stage and the play were pared back to the minimum. There was no Fortinbras, and therefore no political commentary, in the play. The designer's set provided some distracting moments. Ophelia’s grave is a jumble of garments. Why? Does this refer to apparel oft proclaiming the man? Yet it also supplies a marvellous entry for the Ghost. Hamlet's father's ghost is heralded by the lowering of a forest of lightbulbs which, accompanied by a clanging chime, glow and fade to the bewilderment of watchers. In general the staging was simple, in line with a stripped-down text. I thought the stage was amazing, Chris wasn't so sure, and I think this view was shared by many in the audience!

This production of Hamlet has a Player Queen (the powerful and mellifluous Claire Benedict), female gravediggers (Michelle Butterly is a jaunty scouser) and a knowing biker of a Rosencrantz (Jodie McNee). Gillian Bevan makes her courtly adviser (“Polonia”) a fusspot, continually tweaking her dark suit into place and accompanying her orotund phrases with redundant flourishes of her hands. She is highly entertaining, though not a major contributor to the sinisterness of Elsinore. These gender switches may unsettle for a moment but they do not distort the play.

Overall, it wasn't my favourite production of Hamlet. I hoped it would be comparable to Frances de la Tour's performance, 30 years ago. It wasn't. It was wonderful to see Maxine Peake perform something so challenging and different but it wasn't what I was expecting.
Theatre