Goldsmith's She Stoops to Conquer 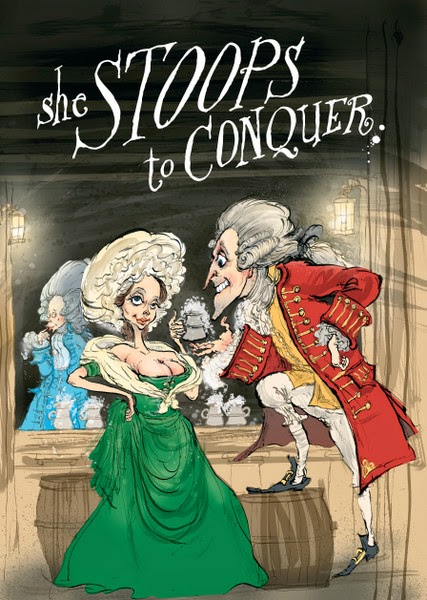 Oliver Goldsmith's She Stoops to Conquer is one of my favourite plays, if not my absolute favourite! It was the first "serious" play that I ever saw. I was twelve, we studied it in class and then my inspirational English teacher took us to the Liverpool Playhouse to watch it.

I've seen She Stoops many times since this first time and it never ceases to enthral and delight. Chris and I saw it at the Dukes in Lancaster on our very first date and then we saw it many years later at Felini's in Ambleside with the lovely Katherine Kelly in the lead role.

I was so thrilled, therefore, to discover that there was to be a reprise of my favourite play, performed  by Northern Broadsides and, once again, at the Liverpool Playhouse. I loved the description "Be prepared for wit, wingding and very big wigs".

There's just something so wonderful about the play. The misunderstandings, the trickery and the twists and turns of the plots. It's magical! Set around the chaotic proceedings of one very long night, Northern Broadsides’ talented cast of actor-musicians brought their theatrical magic and innate sense of fun to this accessible and delightfully ludicrous romantic romp.

Northern Broadsides were magnificent. They brought a freshness to the performance and the musicians were fantastic.
Theatre