Posted by Chris on December 16, 2014
During our recent visit to Vilnius we visited the Church of St Theresa. It's a stunning church built by the Discalced Carmelites in 1633 - 1654. Unlike, most of the churches in Vilnius, the Church of St Theresa has never been closed down. The Church is a baroque masterpiece and the interior is absolutely stunning.

St Theresa was a Carmelite nun and mystic. She lived in Spain during the sixteenth century and was a key figure in the Counter Reformation. Left motherless she embraced a deep devotion to the Virgin Mary who stood in place of a mother to  When she was a small child Theresa was fascinated by accounts of the lives of the saints, and ran away from home at age seven with her brother Rodrigo to find martyrdom among the Moors - "she's for the Moors and martydom...." 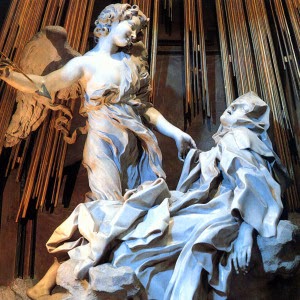 She experienced spiritual visions which lasted almost uninterrupted for more than two years. In one of her visions, a seraph drove the fiery point of a golden lance repeatedly through her heart, causing an ineffable spiritual-bodily pain.


This vision was the inspiration for one of Bernini's most famous works, the Ecstasy of St Theresa.

So, why am I so fascinated by St Theresa? Because she was the inspiration for some of Richard Crashaw's most beautiful and Baroque poetry. The Baroque was not embraced in literature in England as it was on the continent and Richard Crashaw is the only true exponent of the style. His poetry is full of over blown metaphors and no where is this more true than in his Hymn to St Theresa.

So, that was why I enjoyed the church so much, it was beautiful and another gem to add to the architecture, poetry, sculpture and paintings of the Baroque.
Books Lovely stuff Places