Posted by Lindsey on July 11, 2015
We had a wonderful couple of days in Stratford on Avon doing toursity things and the highlight of the trip was a visit to the Swan Theatre to see a fabulous production of Love's Sacrifice by John Ford. 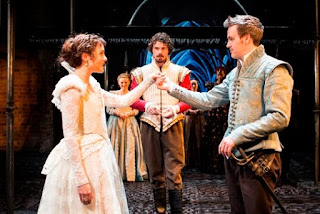 The Swan Theatre is almost entirely dedicated to showing the works of William Shakespeare's contemporaries and playwrights from the Seventeenth Century. It's really exciting that there is a theatre which specialises in plays which are performed so infrequently. My only concern is that I will want to see every play!

Love's Sacrifice was first performed in 1633; it's a revenge tragedy echoing Shakespeare's Othello and exploring the destructive power of jealousy. The play first appeared in the same year as Ford's other plays 'Tis Pity She's a Whore and The Broken Heart. I have  wanted to see Love's Sacrifice since I discovered Richard Crashaw's poem Upon Ford's Two Tragedies. Crashaw's couplet fascinated me; what is he saying?

Thou cheat'st us Ford, mak'st one seeme two by art
What is Loves Sacrifice, but the Broken Heart?

Is Crashaw saying that the two plays are the same or that they both share similar themes? If the latter, then is he saying that the overriding theme of both plays is faith and religion and possibly the Catholic faith? 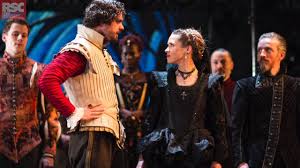 Anyway, back to the play and the performance. It was electrifying and intense. There was so much symbolism in the shape of bleeding hearts, blood red and oaths and vows. There was jealousy and vengeance; revenge and love; sacrifice and torment. It's powerful stuff!

I simply loved it and didn't want the play to end.
Lovely stuff Theatre