Posted by Lindsey on July 22, 2015
Last week, at the eleventh hour and fifty ninth minute, a friend got in touch to let me know that she had a spare ticket to see Neil Diamond at the Arnea in Manchester. I've never seen Neil Diamond in concert and love a lot of his music, so jumped at the chance to join her. 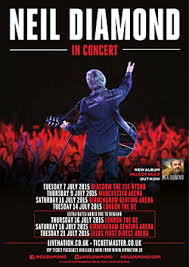 The tickets for Neil Diamond's UK tour had sold out months ago as he was only performing at five venues across the country. I couldn't believe my luck!

I've been to the Arena a few times and I've been to lots of "rock" concerts but nothing prepared me for the vast number of people flocking to see the concert. The Arena was packed to capacity, at least 21,000 people and our seats were up in the gods!

I do suffer from mild vertigo so spent the first 15 minutes clinging to my seat and refusing to look down at the stage. I reckoned that this could be a bit of a problem so, after a bit, I plucked up the courage to look around me and to get accustomed to the view and the huge drop down to the stage! After a while the dizziness subsided and I was able to get into the spirit of the event. Fortunately I was feeling better by the time the man himself came onto the stage.

To sum up the concert succintly, Neil Diamond was brilliant. He performed for over two hours without a break and, after a quick change, for almost another hour. He sang many of his hits but not all of my favourites.

There was a good mix of old and new songs including many from his most recent album; Melody Road.  He also performed quite a few songs from the Jazz Singer including America and Hello Again. I love the Jazz Singer for its warmth and humanity so this was great. It was the film which made me first aware of Neil Diamond as a singer/actor. 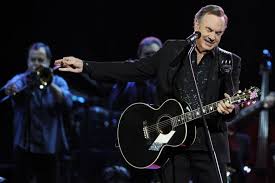 But, he didn't sing my absolute favourite, September Morn! But I shouldn't complain as I had a wonderful evening!
Music