Posted by Lindsey on August 25, 2015
On our journey home from Hay on Wye we visited Wroxter, a Roman city with the highest remaining Roman wall in the UK. It was totally amazing! 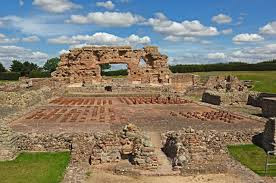 Wroxeter, or Viriconium, was the fourth largest city in Roman Britain and there are quite significant amounts of its ruins remaining including the bath house and the marketplace.

We visited on a beautifully warm and sunny day and it really felt like we were in Italy. The sun was beating down on the stones and the reconstruction of a Roman villa felt like the real thing. I can totally understand why three, very different, poets were moved to write about Wroxter. All three writers expressed similar sentiments which completely concur with my own feelings! When you visit ancient places and ruins their very ancientness puts current day problems into perspective.

I had forgot that so remote an age
Beyond the horizon of our little sight,
Is far from us by no more spanless gauge
Than day and night, succeeding day and night,
Until I looked on Thee,
Thou ghost of a dead city, or its husk!
But even as we could walk by field and hedge
Hence to the distant sea
So, by the rote of common dawn and dusk,
We travel back to history's utmost edge.
Yea, when through thy old streets I took my way,
And recked a thousand years as yesterday,
Methought sage fancy wrought a sacrilege
To steal for me such godly privilege!

A E Housman's A Shropshire Lad

On Wenlock Edge the wood's in trouble;
His forest fleece the Wrekin heaves;
The gale, it plies the saplings double,
And thick on Severn snow the leaves.
'Twould blow like this through holt and hanger
When Uricon the city stood:
'Tis the old wind in the old anger,
But then it threshed another wood.
Then, 'twas before my time, the Roman
At yonder heaving hill would stare:
The blood that warms an English yeoman,
The thoughts that hurt him, they were there.
There, like the wind through woods in riot,
Through him the gale of life blew high;
The tree of man was never quiet:
Then 'twas the Roman, now 'tis I.
The gale, it plies the saplings double,
It blows so hard, 'twill soon be gone:
To-day the Roman and his trouble
Are ashes under Uricon.

Virocon - Viricon-
Still the ancient name rings on
And brings, in the untrampled wheat,
The tumult of a thousand feet....
Places Poetry Ruins