Summer of Places and Writers

Posted by Lindsey on September 07, 2015
This summer has been a summer of visiting beautiful places and enjoying places connected with writers. I've posted about lots of the places we've been which have a literary connection but there are a few connections which haven't found their way onto the blog yet, so here they are.... 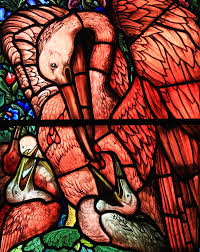 Following a visit to Hadrian's Wall on Bank Holiday Monday we made a quick detour to enjoy the Pre-Raphaelite splendour of Brampton Church. As well as being designed by Phillip Webb, a Pre-Raphaelite architect, its main window is a wonderful example of  Edward Burne-Jones' designs. One of the key figures in the window is of a pelican which feeds its young from its own blood, an image which Richard Crashaw employed in his poem The Weeper:

O soft self-wounding Pelican!
Whose breast weeps Balm for wounded man.
Ah this way bend thy benign flloud
To a bleeding Heart that gaspes for blood.

In July we spent a couple of days in Anglesey enjoying the Bay of Beaumaris and following in the footsteps of John Betjeman.

A Bay in Anglesey - John Betjeman

The sleepy sound of a tea-time tide
Slaps at the rocks the sun has dried,
Too lazy, almost, to sink and lift
Round low peninsulas pink with thrift.
The water, enlarging shells and sand,
Grows greener emerald out from land
And brown over shadowy shelves below
The waving forests of seaweed show.
Here at my feet in the short cliff grass
Are shells, dried bladderwrack, broken glass,
Pale blue squills and yellow rock roses.
The next low ridge that we climb discloses
One more field for the sheep to graze
While, scarcely seen on this hottest of days,
Far to the eastward, over there,
Snowdon rises in pearl-grey air.
Multiple lark-song, whispering bents,
The thymy, turfy and salty scents
And filling in, brimming in, sparkling and free
The sweet susurration of incoming sea.

Our trip to Northern France was spent in the footsteps of many famous writers, both French and British. Lower Normandy was well known by Gustave Flaubert and it is where he wrote Madame Bovary. The novel is about the wife of a provincial doctor who longs for the pleasures of Paris. We were very happy to enjoy the simple pleasures of rural France and give the city a miss!

So, that was the summer of 2015. Hopefully, there is one more literary pilgrimage to come before we declare the summer over....
Books Places