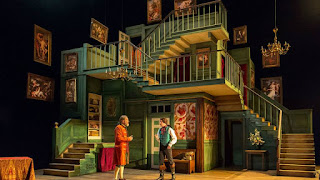 I have always loved Restoration comedy and until recently there haven't been many productions to enjoy. However, over the last few years the productions have been coming, if not exactly thick and fast, then fairly frequently. So, I was really excited to find that the RSC is perfoming William Congreve's Love for Love in Stratford in October and then, to discover that the National Theatre is staging George Farquhar's The Beaux' Strategem.

Initially, I was a bit disappointed that the production wasn't on tour but only in London and then Chris spotted that The Beaux' Strategem was one of the productions being streamed live to local cinemas. This was good news, but even better was the news that we could watch the play at Felini's in Ambleside.

So, last week we popped up to Ambleside for a spot of tea at Zeferelli's followed by The Beaux' Strategem. It was a wonderful production with fabulous staging and acting. As with so many productions now, there was singing, dancing and instrument playing. The actors were so incredibly versatile and gave an excellent performance. 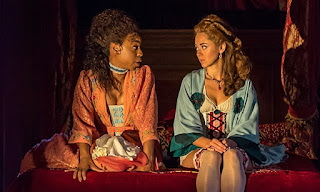 The play tells the story of two dissolute young men, who fleeing London to escape their debts, find themselves in Lichfield where they seek women to marry for money! Lodged at the local inn, posing as master and servant, they encounter a teeming variety of human obstacles: a crooked landlord, a fearsome highwayman, a fervent French Count, a maid on the make, a drunken husband, a furious butler, a natural healer and a strange, turbulent priest. But their greatest obstacle is love. When the Beaux meet their match in Dorinda and Mrs Sullen they are most at risk, for in love they might be truly discovered.
Theatre