Posted by Lindsey on June 05, 2016
So, Northern Broadsides are back on top form, it's official! This year's production is Shakespeare's Merry Wives and we enjoyed our visit to the Liverpool Playhouse with a friend last week to watch the play. 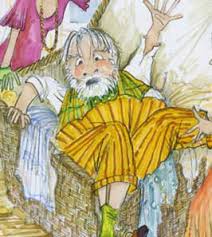 Northern Broadsides are back to their original, excellent form, before they started venturing into some of the strange dramatic avenues of the last few years. It's more than twenty years since I first saw Northern Broadsides perform Merry Wives in the sports hall of Barrow Sixth Form College! This performance had the same zest and gusto with added finesse and style.

This year's production: Merry Wives, not of Windsor, but of anywhere the audience chooses to imagine, is a play for everyone; the audience is invited to place the merry wives wherever they please - Harrogate, Skipton, Liverpool ...As Barry Rutter says, and so many critics before, the true location of all Shakespeare's plays is in the minds of the audience. Shakespeare might tell us that the play is set in Athens, Verona, Egypt or ancient Rome but the setting is irrelevant and what really matters is the characters and human nature.

Anyway, the play was superb. Wonderful actors and Barry himself back on top form, lots of singing and dancing and some fabulous jokes and japes! Sir John Falstaff was the star of the show and Rutter played the role with more than a touch of Toad of Toad Hall complete with breeches and yellow waistcoat! Falstaff shares much of Toad's hubris... he even ends up in a laundry basket, just like Mr Toad. 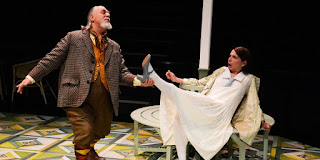