Sheridan's The Rivals at Theatre by the Lake

The new season of plays at the Theatre by the Lake in Keswick appears to be a really good mix and I was very excited to find that Sheridan's The Rivals was being performed. I suggested that we booked for early in the season so that we could visit again later in the year, should the performance be really good!

I am happy to say that we enjoyed an excellent performance. The Rivals is one of my favourite plays. Too late to be a Restoration comedy the play does, however, exhibit many of the characteristics of this era. Lots of slapstick and misunderstandings make up the entertainment. The Rivals is essentially a comedy of manners. Set in Bath, it satirises the romantic dramas popular in the late Eighteenth century as well as acting as a warning for young ladies against an over indulgence in sentimental novels!

The plot is very simple and hinges on multiple cases of mistaken identity and duplicity. But, so complicated are the webs of deceit, created by the characters that the audience has to pay particular attention to the action on the stage in order to keep up with plot.

One of the characters, Mrs Malaprop, was so popular that the play coined the word malapropism meaning using the wrong word because it sounds like another, incorrect, word. My two favourite utterances are "He's the very pineapple of politeness" and "she's as headstrong as an allegory on the banks of the Nile". Wonderful stuff! 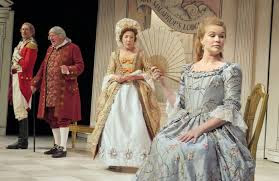 I think that we might be booking for another performance in the not too distant future!
Theatre