Having a few spare hours on Friday afternoon we decided to pop up to Grasmere. The Wordsworth Trust at Dove Cottage has curated a collection of books and pictures into an exhibition about Wordsworth-shire entitled Lakes, Mountains and Waterfalls.

The exhibition enables us to follow in the footsteps of the early Wordsworthian pilgrims, using original guide books, maps, poems and paintings. Tourists in the Nineteenth Century wanted to stand where Wordsworth had stood, and to experience the very scenery described in his poetry. It's fantastic to be able to share those early experiences of tourism and the first tourists coming to the Lake District or, Wordsworth-shire, as so many writers called it.

Lakes, Mountains and Waterfalls explores the ways in which Wordsworth's words began to draw people to the landscape that inspired them, and shows how the Lake District became so inextricably linked with its most famous figure.

There are so many locations explored in Wordsworth's poetry including the famous scene in Wordsworth's Prelude of the boat stealing episode, which we now know was inspired by the scenery of Derwentwater.

I struck and struck again,
And growing still in stature the grim Shape
Towered up between me and the stars, and still,
For so it seemed, with purpose of its own
And measured motion like a living Thing,
Strode after me.

Worsdworth was also enthralled by the large boulder - the Bowder Stone - and wrote about it: 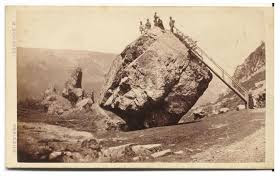 “…But worthier still of note
Are those fraternal four of Borrowdale,
Joined in one solemn and capacious grove;
Huge trunks! – and each particular trunk a growth
Of intertwined fibres serpentine
Up-coiling, and inveterately convolved, -
Nor uninformed with phantasy, and looks
That threaten the profane; - a pillared shade,
Upon whose grassless floor of red-brown hue,
By sheddings from the pining umbrage tinged
Perenially – beneath whole sable roof
Of boughs, as if for festal purpose, decked
With unrejoicing berries, ghostly shapes
May meet at noontide – Fear and trembling Hope,
Silence and Foresight – Death the skeleton
And Time the shadow…”

The exhibition displays photographs and illustrations from contemporary writers and artists. We already have many of the books on display including William Knight's Through the Wordsworth Country as well as Eric Roberston's Wordsworth and the English Lake County.

We were thrilled to find that the Wordsworth Trust is publishing a new, lavishly illustrated, edition of the Prelude in November. We immediately booked in the launch on November 5th.
Books Places Poetry