Canon Rawnsley's October in the Lakes

Posted by Lindsey on October 30, 2016
Every month, throughout 2015, I posted an excerpt from Canon Rawnsley's Months at the Lakes. That is until October 2015 when the rains and floods came, followed swifly by the dreadful news about building in Dolphinhome and our sudden decision to move house.... So much was happening that I simply abandoned my Rawnsley posts.

So, a year on, and such a lot has happened, I decided it was time to complete my year of Rawnsley excerpts. So here are the Canon's thoughts about October.

It is mid-October.....but one might believe that an all golden summer time such as poets dreamed of had come to stay, so lightly flies the gossamer in air, so warmly falls the sun upon one's cheek. Down in the vale the hedgerows have not quite shed their leaf, though the dazzling corals on the thorns and the hips upon the roses could never have shone so fair if some of their leafage had not first been shed.

The colour of the hills, and especially of the lower slopes of them, is in this October month more gorgeous than in any season of the year, for the brackens, though they have turned to gold, seem to be full of life and sap still - they sheet the mountainside in living gold; another month, it is true, they will be deeper russet red, but the russet red will have about it a look of decay which the October fern can never know. 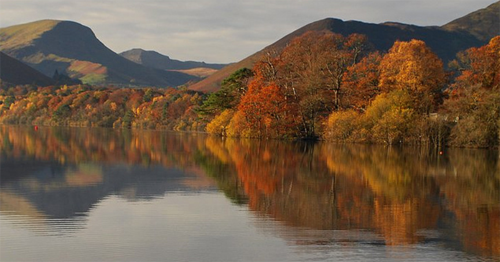