Posted by Lindsey on October 02, 2016
On our way home after a couple of days in and around Hay on Wye we decided to follow one of the Mary Webb trails around Shropshire. We chose the second trail as this would enable us to concentrate on the countryside and small towns around Shreswbury including the beautiful Much Wenlock.

Mary Webb was a late Victorian novelist and poet who had an overwhelming passion for the Shropshire countryside where she was born. Her novels, the most famous of which is Precious Bane, have been out of fashion for many years. In fact, I only discovered her novels when I read the wonderfully satirical Cold Comfort Farm by Stella Gibbons. In this novel Gibbons is parodying the bucolic, pastoral novels of Mary Webb and other similar writers, which, although beautiful, are often doom laden. Hence the wonderful character in Cold Comfort Farm of Great Aunt Ada Doom who once "saw something nasty in the woodshed" and never got over it! However, whilst I adore Stella Gibbons' work I have also come to appreciate the writing of the woman she so cleverly parodied. 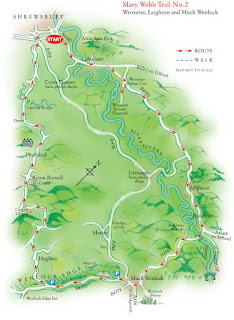 Mary Webb's love and intimate knowledge of the county permeates all her work. She had an extraordinary perception of the minutiae of nature, and it is this keen observation that gives her prose its unique quality. In her introduction to Precious Bane she writes" Shropshire is a county where the dignity of ancient things lingers long, and I have been fortunate not only in being born and brought up in its magical atmosphere, and in having many friends in farm and cottage who, by pleasant talk and reminiscence have fired the imagination, but also in having the companionship of such a mind as was my father's- a mind stored with old tales and legends that did not come from books, and rich with an abiding love for the beauty of forest and harvest field..."


Our tour took us to Much Wenlock, a beautiful Medieval market town; Wenlock Abbey, then on to Buildwas Abbey and then past the village of Leighton where Webb was born in the lodge. Our final destination was Attingham Park where Webb spent many happy hours and where she set her final novel Armour Wherin he Trusted. 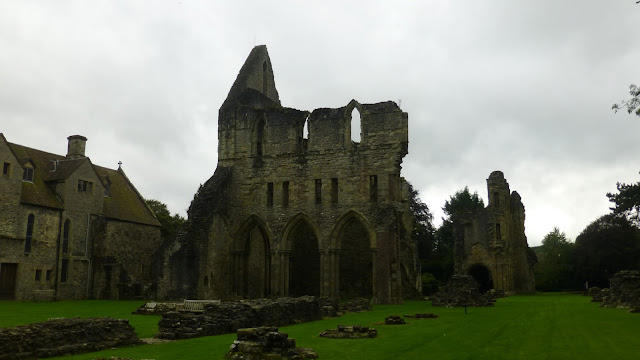 Of Much Wenlock Mary Webb wrote that it is "a very Rip van Winkle of a borough.  Somewhere in the middle ages it had fallen asleep." Of the hills around Much Wenlock she wrote:

Multiple-tinted, magical, still
Is the plain, where the blue cloud-shadows pass
The silver tree, the forget-me-not hill.
- ‘Absence’
She spent many hours in Wenlock Abbey fascinated by the ruins of this 12th century Cluniac foundation, and by the legend of St. Milburgha, whose 7th century abbey was also on this site. In the cottage at the end of the row nearest Priory Hall, Mary, age ten, used to read the bible to the old beadle John Lloyd.

All in all, a very lovely day with lots of wonderful sights to enjoy.