Posted by Chris on January 12, 2017
Despite (or perhaps because of) growing up with Captain Kirk and the Starship Enterprise, I've never been very interested in talking to computers. I also remember early efforts in the 1990s when you had to spend hours 'training' the computer to understand your voice and accent - and even then it was very hit and miss.

So the latest crazes of Cortana on Windows, OK Google, Siri on the iPhone and the rest have passed me by. But I've been intrigued by Amazon's Echo and with the appearance of the Echo Dot (and a further £10 reduction on Black Friday) I thought it was a toy worth trying out. 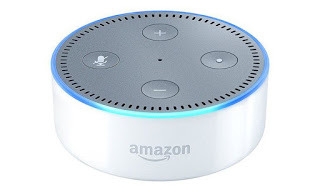 So what is it? It's a small device which connects to your wi-fi and then to the internet and, in particular, the Amazon Echo service. It sits inert but as soon as you talk to it, using the wake-up word 'Alexa', it lights up and produces answers or actions. And it seems that whatever you accent and however much background noise there is, it almost always understands you.

Why is it good? Most importantly, it just works. It understands and accurately interprets everything you say - and you don't need to speak slowly, carefully or loud. You can even talk quietly from across the room and it hears you clearly. And it's uncannily good at coming up with accurate, fast answers.

What don't I like? I'm never keen on relying on cloud services. Without its internet link to the Amazon Echo service, the Echo Dot is just a useless piece of plastic. But, equally, for the price and size, you can't really expect the artificial intelligence to be inside the unit.

Some people have concerns about security, the idea that somewhere inside the Amazon server is a long list of all the things you've ever said within earshot of the Echo - and which could find its way into the hands of the CIA, NSA, MI5 or their Russian or Chinese equivalents. If this is the kind of thing that keeps you awake at night then the Echo probably isn't for you. In fact, you'd best avoid the internet altogether.

If it follows other cloud services, my bigger worry is that at some point Amazon will try to 'monetize' the service by analysing my chats wth Alexa and producing targeted adverts. That might be the point where I switch it off.

But for now, and whilst I hate to admit it, talking to a piece of technology now seems fun and quite natural. And genuinely useful.
Technology