We were determined this weekend not to get stuck indoors but instead to get out and enjoy some fresh air. We had not accounted for the tail end of Storm Doris which brought darkness, strong winds... and lots and lots of rain.

Undeterred we headed north to the area west of Penrith where we picked out a few things suitable for the weather. As always, I took a few photos, but the weather was so dreadful that they all look miserable - so I've used other more cheering photos instead.

As we approached the village of Greystoke we passed a number of castellated follies, mostly farm houses. These were built towards the end of the 18th century by the 11th Duke of Norfolk who owned Greystoke Castle. We counted four follies although there may be even more. The Duke clearly liked his architectural jokes.

Approaching from the east, the first three are all farm houses: Spire House, Bunkers Hill and Fort Putnam.

There are various stories (probably apocryphal) about the building of these 'folly farmsteads'. One is that a tenant refused to pay the sharply increased rent on his farm '...until I'm living in a castle', and the Duke duly obliged. Most likely, however, they were just a way of the Duke showing off his wealth.

The fourth folly, Stafford House, is inside the grounds of the castle and is today used as a B&B.
Arriving in the village itself, we explored the interesting church. Far too large for the village it serves, it dates from the 16th century and contains some interesting features. 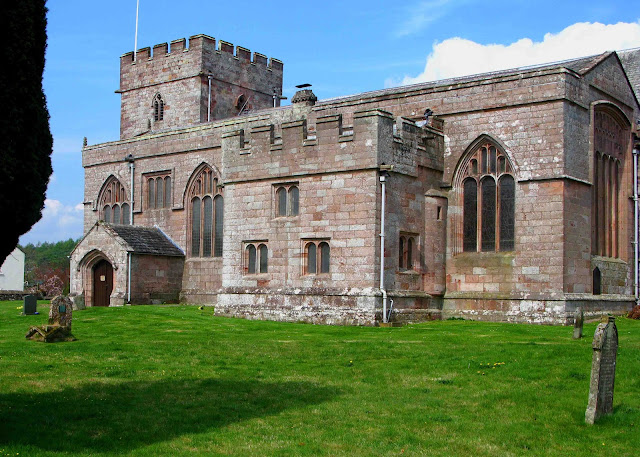 Among the most notable is the great east window. In the mid 17th century the owners of the castle were both Catholics and Royalists and feared the worst when they heard that Cromwell was approaching. So the entire window, made from priceless medieval glass, was removed and buried, only being restored in the mid 19th century. It is notable for including an image of the devil being trampled under-foot by a bishop, the only such image in an English church window. 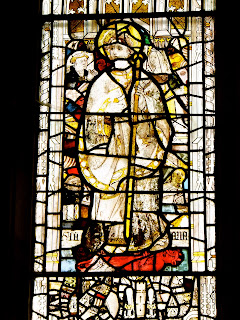 From Greystoke we travelled north to the village of Unthank where we dried out and enjoyed lunch at the Upfront Gallery's excellent veggie café. After a browse of the fine items on sale we headed north to Carlisle to visit our favourite north Cumbria bookshop.

On our way back down the M6 we stopped at Tebay Services - the only family-owned motorway service area in the country and very different from all the others. It includes a genuine farm shop where we picked up some local delicacies to enjoy in the evening.
By now the wind had died down but it was pitch dark, raining and foggy. The remaining 25 minutes' drive home wasn't much fun!
Books Food Places