Posted by Lindsey on April 24, 2017
This year, for our annual birthday treat, Penny and I decided that we would like to see the world premiere of Nicholas Pierpan's new play "William Wordsworth". The play is premiering at the Theatre by the Lake in Keswick. 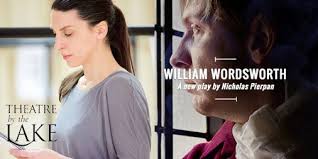 The play focuses on a single year in the poet's life: 1812, and follows the poet, his sister, Dorothy; sister-in-law, Sarah Hutchinson; wife, Mary Hutchinson and children.

Money is tight in the Wordsworth household, the chimneys are smoking and the children are sick. There is no money to fix anything and Dorothy and Sarah are begging Wordsworth to complete a poetical work, to sell it and make some, much needed money. Wordsworth, however, is more interested in repairing his relationship with Coleridge and currying favour with the London elite. 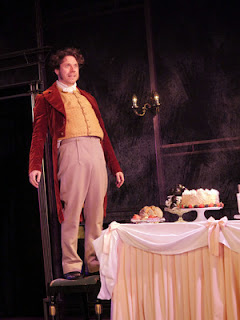 The play was wonderful, atmospheric and compelling. John Sackville in the title role, had much in common with a young Ted Hughes, and brought a new dimension to the poet's life and behaviour. Dificult in such a crowded marketplace.

Samuel Taylor Coleridge was played with vigour and verve by Daniel Albison. The complex relationship between the poets was explored and, somewhat, explained. Coleridge's love for Sarah Hutchinson, and his despair over his wife - the other Sara, plays a part in the drama. Coleridge expresses his envy of Wordsworth's adoring womenfolk "They all love you! They are obsessed with you! And look at yourself; What have you done to deserve such adulation?" What indeed? Two of the Wordsworth children die, the chimneys continue to smoke and Wordsworth prevaricates over accepting a job with Lord Lonsdale which will enable him to provide for his family.

Dorothy and Sarah were sympathetically dealt with and provided strong female leads and an insight into Wordsworth's relationship with his, often less than, adoring female relations.

The scenery was amazing and the scenery changes integrated into the play to add a certain balletic and mesmerising quality to the play.

All in all, an excellent afternoon and followed with a birthday meal at Zeffirelli's. Bliss!
Food Lovely stuff Theatre