Posted by Lindsey on June 06, 2017
On Saturday we headed off to Manchester with friends to enjoy a wonderful production of Twelfth Night at the Royal Exchange. 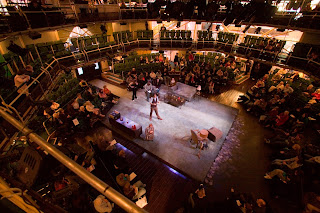 Theatre-in-the- round was a fairly recent concept in the 1970s having become popular in the 1960s in the UK and Europe being based on the ancient theatre, particularly that of Greece and Rome. In effect, theatre-in-the-round removes the fourth wall and brings the actor into the same space as the audience. This has the effect of creating a closer relationship between the actor and the audience and I remember being thrilled by the immediacy and intimacy of the experience. I probably didn't quite express it like that back then! My love of this type of staging hasn't changed. I still find it exciting and the most challenging way to see a play.

Saturday's performance was wonderful, every bit as clever and thought provoking as my first ever Shakespeare and brought up to date with is sense of dislocation and of washed-up human cargo. Viola, as she is shipwrecked on an Illyrian beach wears a high vis jacket and could have just been pulled from the Mediterranean sea. The director brings the story of Viola and Sebastian up to date. Are they refugees from another country? How will they be treated in this strange land, all alone? “And what should I do in Illyria?” she emptily asks " My brother he is in Elysium. Perchance he is not drown'd." Poignant words, indeed. 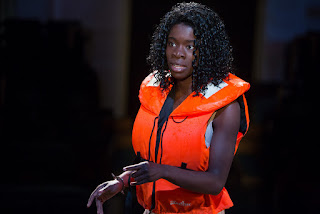 But as well as the sadness and sense of losses and pain there is also the madness and hilarity of the subplot of Sir Toby Belch, Maria and Andrew Aguecheek, together with Festes, my Lady's fool. Their persecution of Malvolio is wonderfully handled and I was thrilled that this production, just like my very first production, featured Malvolio on a bicycle. Was this a reference to that long ago production?

All in all a very enjoyable afternoon rounded off with a meal in Annie's.
Theatre