A Charm for Bees

Posted by Lindsey on July 30, 2017
We were watching the bees enjoying the lavender in the garden today and I thought about an Anglo-Saxon charm about bees that I learned years ago. It's lovely to think of people from all those centuries ago cultivating their garden borders and producing honey from their flowers. It wasn't all war and pillage!

For a Swarm of Bees is an Anglo-Saxon metrical charm that was intended for use in keeping honey bees from swarming. The text was discovered by John Mitchell Kemble in the 19th century. The charm is named for its opening words, "wiþ ymbe", meaning "against (or towards) a swarm of bees" 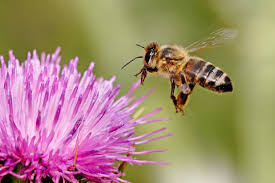 Settle down, victory-women,
never be wild and fly to the woods.
Be as mindful of my welfare,
as is each man of border and of home.
Garden Poetry