Posted by Lindsey on July 22, 2017
I've never been a big Alan Bennet fan. I know lots of people love his plays but they've never really appealed to me. However, when our lovely neighbours told us that there was a performance of Talking Heads at the Bolton Octagon I decided to put my prejudices aside and give Alan Bennet a whirl. 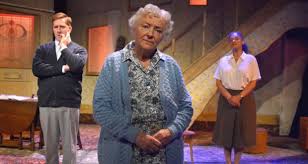 The Octagon staged three of Bennet's monologues. In these moving and affectionate pieces, Bennett depicts the bittersweet tales of seemingly ordinary and uneventful lives. They were poignant and wonderfully observed and I must say that I enjoyed them more than I thought I would.

A Chip in the Sugar is a story of middle-aged Graham who finds life becoming complicated when his mother, or "Mam", with whom he still lives, reunites with an old flame.

Lady of Letters concerns Irene as a one-woman Neighbourhood Watch scheme and her habit of writing letters gets ridiculously out of hand.

A Cream Cracker under the Settee features 75 year-old widow Doris, obsessive about tidiness and maintaining her independence, has a fall that decides her future. Made famous by Thora Hird in the original TV series.

Whilst I was in the Theatre I was under the spell of Bennet's wonderful language and command of the stage. The acting was also wonderful, but when we came out I realised that I found all of the monologues disturbing and a bit depressing.

I enjoyed my foray into Alan Bennet land but I don't think I'll be going there again!
Theatre