Posted by Lindsey on July 24, 2017
The weather has been lovely recently and this has enabled us to visit many ruins, abbeys and castles. One of my long held desires has been to complete the Hardwicke Rawnsley Trail in and around Keswick. The first sunny Saturday in July found us heading north to Keswick.

Canon Rawnsley isn't much remembered today but amongst his achievements was co-founding the National Trust and promoting the development of the Arts and Crafts movement. He was an exceptionally practical man and believed that teaching skills in metalwork and woodcarving would help to alleviate the considerable unemployment and poverty which affected Keswick during the winter months. 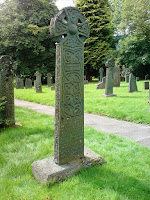 Our starting point was St Kentigern's Church at Crosthwaite, near Keswick. Rawnsley went to St Kentigern's as vicar in 1833 following his departure from Wray Church, near Hawkshead and stayed for 33 years.

St Kentigern's is the oldest church in Keswick being built on a church established in 555. The churchyard contains the graves of several notable 'locals' including Jonathan Otley, 'the father of English geology', Robert Southey and Elizabeth Linton, daughter of a Vicar of Crosthwaite and the country's first professional woman journalist. Canon Rawnsley is also buried in the graveyard and his grave is marked with a beautiful Nordic Cross decorated with the Norse endless knot.

Rawnsley's time in Keswick was well spent and, together with his wife Edith, he established the Keswick School of Industrial Arts. This building has now fallen into disrepair. The teaching in the School was based firmly on Ruskin's philosophy of counteracting  the pernicious effect of machines on man's creativity and produced items in copper, silver, pewter and brass. In later years stainless steel replaced the other metals and in 1984 the School was forced to close through competition from abroad. The earlier pieces of work are now very collectable. The motto which runs below the balcony reads 'The loving eye and patient hand, shall work with joy and bless the land'.

Next we headed to Greta Hall, the former home of the Poet Laureate, Robert Southey. Greta Hall was also Coleridge's home for many years and it was where Coleridge regularly left his wife Sarah in Southey's care whilst he gadded about London! Greta Hall was bought by Rawnsley in 1909 and rented to the headmaster of Keswick Grammar School as a girls' boarding house. 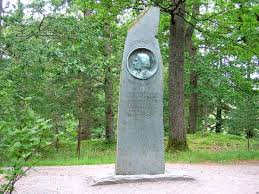 Finally, we headed down to the Lake to see the Ruskin Monument which Rawnsley erected in 1900 following John Ruskin's death.

All in all, we had a smashing day and thoroughly enjoyed all of the Rawnsley connections as well as lots of other literary figures.

A quick pop into the Keswick Bookshop yielded a selection of Rawnsley books.