Posted by Lindsey on July 30, 2017
This year, for the Gilbert and Sullivan extravaganza, we decided to stay overnight in Buxton and chose the Palace Hotel. Staying in Buxton meant that we had some time to explore parts of Derbyshire we don't normally visit. Chris put together a tour which included Peveril Castle, Eyam, Bakewell and Hathersage.

I have to admit that until we arrived at Hathersage Church I had no idea that there are links between Derbyshire and Charlotte Bronte. I always associated the Brontes with Haworth and, to a lesser extent, with Casterton, but not with Derbyshire. 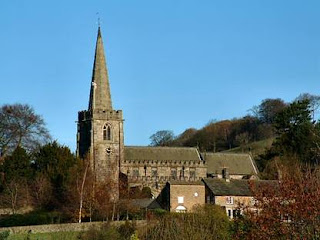 In 1845, Charlotte Brontë came here to visit her school friend, Ellen Nussey, and although she only stayed for three weeks, the village became a major source of inspiration for her first novel, Jane Eyre. Ellen Nussey's brother, Henry, was the vicar of Hathersage church and it's generally believed that Charlotte had Henry in mind when she wrote the character of St John in Jane Eyre. In real life, Henry Nussey proposed to Charlotte, but she refused him because he was too boring. When Charlotte came to visit Ellen in 1845, she stayed with her at the Vicarage.

She also used North Lees Hall, an Elizabethan manor house a couple of miles north of Hathersage as the house where Mrs Rochester jumped from the roof to her death. North Lees is one seven halls built by Robert Eyre of Highlow (there were many local Robert Eyres) for his seven sons and is one of the finest Elizabethan buildings in the region - a tall square tower with a long wing adjoining. Bronte used it as the 'Norton' of the story 'Jane Eyre' - taking the heroine's surname from the local family. 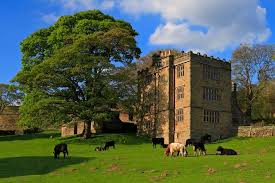 I found the connections fascinating and we decided that we would come back and do the full Jane Eyre Trail. Maybe I didn't know of the connection because Jane Eyre has never been a favourite novel. I know so many people who rave about the novel and the dark, brooding Mr Rochester. Maybe I'm strange, but I have to confess that Mr Rochester leaves me cold and I'm no great fan of Jane herself. I've always preferred Villette and Shirley so that might, in part, excuse my ignorance! 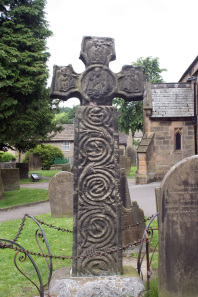 Following our visit to Hathersage we moved onto Eyam, the Plague Village, which has a stunning Saxon Cross in the churchyard. This very fine Anglo-Saxon (Mercian) cross stands 8 foot tall and dates from the 8th-9th centuries. It was apparently set up by missionaries from the north at Cross Low on the moors to the west of Eyam. Originally it was a wayside preaching cross that was 10 feet high and certainly must have looked very spectacular, but now it is only 8 feet high due to it being knocked about a bit in more recent times and losing one of its shaft sections. In the 18th century the cross was discovered beside a trackway on the moors, from whence it was brought to the churchyard of St Lawrence’s church;  but then for a long time it stood abandoned and uncared for in the corner of the churchyard. Eventually  it was restored and placed in the churchyard where it now stands proudly.

The cross is said to be the only one of its type in the Midlands that retains its cross-head. It has some very rich decoration on the west face with fabulous interlacing scroll-work running up the shaft that is typically Mercian in origins. On the west-face, especially the upper section, there are human figures probably St Mary the Virgin with the baby Jesus, angels and Christ in glory, each in their own sections or panels. The cross is grade 1 listed.  St Lawrence’s church houses a Saxon font.
Books Lovely stuff Places