Posted by Lindsey on August 28, 2017
Last Saturday we took a jaunt up the West Coast of Cumbria to Millom and then onto St Bees. The main appeal for me was to visit Millom, the home for all his life (except two years spent in a TB sanitorium) of Norman Nicholson. I know Millom well, but in all the years I've been visiting Millom, I've never spotted Nicholson's home and birthplace. In recent years the Norman Nicholson Society has been raising money to buy the, very modest, three storey terraced house in the centre of the town.

Norman Nicholson is a true Cumbria poet, in the tradition of the Lakes Poets - Wordsworth, Coleridge and Southey. But, unlike them he embraced all of Cumbria, not just the beauty but the industry and the ugliness of industrialsied countryside. He saw the ugliness for what it was and included it in his poetry. In Sea to the West he writes about:

"a brown drizzle
Where black-scum shadows
Stagnated between backyard walls."

"When the sea’s to the west
The evenings are one dazzle...."

There is a window in St George's Church in Millom commemorating the poet with some of his most uplifting lines from Sea to the West included in the design: 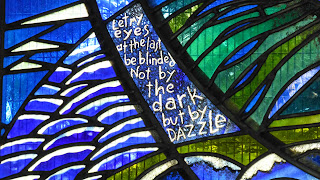 Yet in that final stare when I
(Five times, perhaps, fifteen)
Creak protesting away –
The sea to the west,
The land darkening –
Let my eyes at the last be blinded
Not by the dark
But by the dazzle.

I love this poem so much, it sends a shiver down my spine when I read it.

There is much in Nicholson which reminds me of Dylan Thomas's poetry - the love of beauty but the recognition of the canker nestling in the heart of the rose. Unlike Wordsworth, Nicholson didn't expect his home counties to be fixed in aspic, not allowed to change and adapt.

So, a lovely day which included the Abbey at St Bees, Wabbertwaite Church and a Ninth Century Cross and a return journey which took us over the Honister Pass and past Crummock Water, Buttermere and Loweswater.
Places Poetry