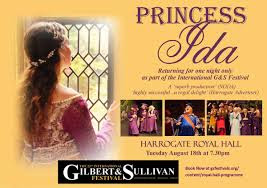 Harrogate isn't as good a venue as Buxton for the Festival. It isn't as intimate as Buxton and whilst  in Buxton the Festival fills the town, in Harrogate, it's just a small part of what's going on. However, in spite of this, we thoroughly enjoyed ourselves! There's always the bonus of Betty's in Harrogate for a sneaky Yorkshire Rarebit!

The Royal Theatre in Harrogate is beautiful and a fitting setting for the wonderful Princess Ida and Castle Adamant.

We were really pleased to see Princess Ida as it isn't performed very often. It is a three act operetta with a great deal of scene changing, but it's very enjoyable with some wonderful music and lyrics. As ever the G&S Company was fantastic with incredible singing, dancing and acting. They really do spoil you for any other G&S performers.

As with all G&S operettas there's a lot more going on than you might realise. So many people think that G&S is pro-estalishment when really it is satirizing the establishment and conservative Victorian society that it is depicting. Princess Ida satirizes feminism, women's education and Darwinian evolution, all of which were controversial hot potatoes in conservative Victorian England. 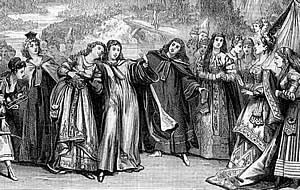 Gilbert's The Princess was based on Tennyson's poem of the same name, which was published in 1847. Essentially, the plot of Tennyson's The Princess  is very similar to Princess Ida. A beautiful maiden has locked herself away in a remote retreat, where she refuses to have anything to do with the world of men. The sancity of the retreat is violated by male intruders. The arrival of the men causes chaos and panic. The maiden eventually yields, and comes to love the chief male intruder.

Tennyson's poem was written, in part, in response to the founding of Queen's College, London, the first college of women's higher education, in 1847. When Gilbert wrote The Princess in 1870, women's higher education was still an innovative, even radical concept. Girton College, one of the constituent colleges of the University of Cambridge, was established in 1869. However, by the time Gilbert and Sullivan collaborated on Princess Ida in 1883, a women's college was a more established concept. Westfield College, the University of Londons' first women's college, had opened in 1882. Thus, women's higher education was in the news in London, and Westfield is cited as a model for Gilbert's Castle Adamant.