Terence Rattigan's After the Dance 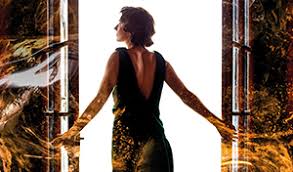 Keswick's Theatre by the Lake's productions are just getting better and better. Last week we enjoyed Terrence Rattigan's much under-rated play After the Dance.

First produced in June 1939 it is an attack on the hedonistic lifestyle of the ‘bright young things’ of the 1920s and 30s. The play signalled a more serious direction in Rattigan's writing after the relative frivolity of the hugely successful French Without Tears.

The production opened in June 1939 to euphoric reviews, but only a month later the European crisis was darkening the national mood and audiences began to dwindle. The play was pulled in August after only sixty performances. With war looming audiences wanted theatre to divert and entertain not theatre to make them think too deeply.

The play makes uncomfortable watching in places, it certainly makes the audience think about the nature of love, life and responsibility. But it is also very lyrical and beautiful.


As with other Theatre by the Lake productions the cast was excellent - convincing and compelling. They recreated the mood of the era brilliantly - moths flying into the flames.

We're looking forward to our next visit to see Stindberg's Miss Julie.
Theatre