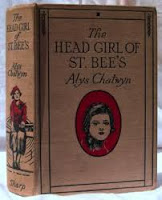 Recently we visited St Bees on the west coast of Cumbria. This small town with its magnificent cliffs and sweeping sea views was the inspiration for a number of early Twentieth Century authors including Alys Chatwyn and Patricia Caldwell.

Alys Chatwyn's two St Bee's novels (note the unusual apostrohe!) were published in the 1920's and compare favourably with the schoolgirl fiction of the period. Chatwyn didn't set any of her other books in Cumbria.

There are plenty of jolly japes and excitement all set against the background of St Bee's. Indeed, the dustwrapper for the first edition of The Girls of St Bee's shows some of the schoolgirls heading down a steep beach into the sea.

The second author to write about the town is Patricia Caldwell who published her Vivians books in the 1950's and who continues to write and be published by Girls Gone By Books today. There are six Vivians novels all of which are set in St Bee's. Caldwell was educated at Bolton School and it is this school which she moves up to the Cumbrian coast and renames Vivians. 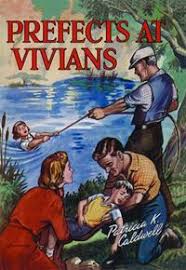 The six books all feature Cumbrian and Lake District settings with adventures taking place down the coast in Arnside and Grange-over-Sands and journeys to and from school on the train from Lancaster to Whitehaven.

Patricia Caldwell, in the Preface to Strangers at Vivians, says "for the building I chose my own day school in which I could't get lost. Then I transported it to the Cumbria coast because I happened to know of one boarding school near Seascale. Then, as now, I didn't think of the coastal strip as part of the Lake District; I only envisaged St Vivian's in green country close to the sea. It was forty-plus years on, when writing Strangers at St Vivians, that I wanted my schoolgirls to taste the delights of hiking and sughtseeing in the Lakes. Even then, they spoke of 'going to the Lake District', and I still find this acceptable."

It's great fun to trace real places, which I know and love, in some of my favourite books. I'm planning a few more excursions to places which inspired fiction over the coming months.
Books Places