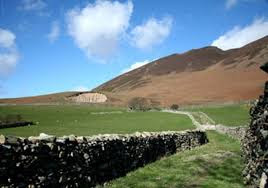 Last weekend we spent a couple of days up on the West Coast of Cumbria, near Millom. Some friends had invited us to join them at the Wayside Inn near Millom. The Wayside Inn has the Whisky Barn attached and offers charming accommodation as well as lots of whisky! I'm not a great whisky fan but I do love Norman Nicholson, who lived all of his life in the shadow of Black Combe.

The view from our bedroom window was of Black Combe. On both days it was fairly damp and the Combe was mostly hidden, which reminded me of Nicholson's comment "When you can see Black Combe, we say in Millom, it’s going to rain, when you can’t see it, it’s raining already."

This height a ministering angel might select:
For from the summit of Black Comb (dread name
Derived from clouds and storms!) the amplest range
Of unobstructed prospect may be seen
That British ground commands:

And Nicholson in "Black Combe White"

Sixty mile back,
Edging the ooze of the estuary mosses - sheep
One side on fire from the level sun; hedges
Clinkering ginger; every dyke and mole-hill
Casting an acre of shadow. And soon
From each rise in the road, each break in the hills' barrier,
Comes glimpse after glimpse of the nearing Combe, first white,
Then patchy, and then streaked white on black,
Darkening and sharpening every minute and every mile.
Home at last to the known tight streets,
The hunched chapels, the long canals of smoke -
And now, from my own doorway, between gable and chimney,
That harsh, scarred brow, entirely stripped of snow,
Impending over yard and attic sky-light,
A dark, parental presence. And when the neighbours tell me:
'The Combe was white last night!' - I don't believe them.
It's always black from here.

Finally, to complete the triumvirate of writers, Branwell Brontë said the fell was formed "to fight 1,000 years of struggles with a storm". Branwell spent six months in Broughton as a tutor and described this pretty town "I am fixed in a little retired town by the sea-shore, among woody hills that rise round me – huge, rocky, and capped  with clouds." He enjoyed travelling around the Duddon Valley and climbing Black Combe.

We thoroughly enjoyed our short break especially strolling in the sand dunes at Haverigg. 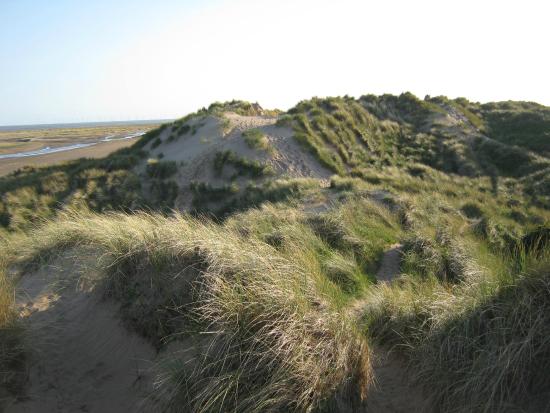