Posted by Lindsey on March 30, 2018
We were very pleased to find that Fellini's in Ambleside was screening Oscar Wilde's Lady Windermere's Fan, live from the Vaudeville Theatre in London's West End. Live screening is a wonderful way to see plays, operas and ballet from some of the best theatres across Europe. Fellini's in Ambleside is a fantastic venue with its plush auditorium, comfortable seats and large glasses of wine! It's easy to lose oneself in the experience and believe that you are really in the Vaudeville Theatre itself. 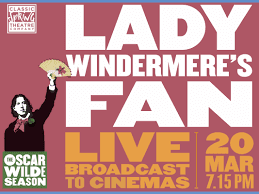 The Vaudeville Theatre has an Oscar Wilde Season, staging all four of his great plays. We have already seen A Woman of No Importance, also streamed live from The Vaudeville and have booked tickets for An Ideal Husband and, of course, Wilde's masterpiece The Importance of being Earnest.

The plot is straight out of a Victorian Sensation novel made so popular by Mrs Henry Wood and Mrs Humphrey Ward and exposes the hypocrisy and double standards of the Victorian era. 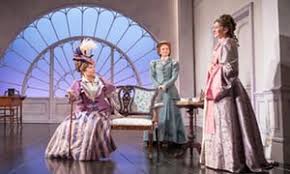 In Lady Windermere's Fan Wilde was targeting a fashionable, upper-middle class audience and he maps out the geography of their world: Grosvenor Square and Curzon Street. Lady Windermere's Fan is a good example of Wilde's most successful dramatic technique: the juxtaposition of the comic and the serious. "Once the absurd and the patently false have been established, the serious emotions and ideas which are explored have been given a setting which prevents them from ever becoming too serious".

Lady Windermere's Fan was directed by Kathy Burke and had a fabulous cast including Jennifer Saunders as the Duchess of Berwick. The Duchess is Lady Bracknell writ light and played brilliantly.

The play includes some of Wilde's best, and most quoted, bon mots including "We are all in the gutter, but some of us are looking at the stars".

A wonderful evening and we're already looking forward to our next visit to Fellini's.
Theatre