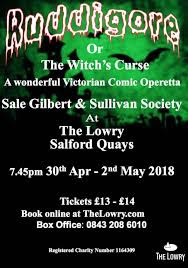 So, the Gilbert and Sullivan season has come round again. This year we were delighted to see that there would be a performance of Ruddigore at the Lowry Theatre on Salford Quays. I quickly booked some tickets and the evening finally came round....

Ruddigore has always been one of my favourite G&S operas and with a chorus of professional bridesmaids, a gallery of ghostly ancestors; the villain who carries off the maiden; the priggishly goodmannered poor-but-virtuous-heroine; the hero in disguise, and his faithful old retainer who dreams of their former glory days; the snake in the grass who claims to be following his heart; the wild, mad girl; and so forth and with it all revolving around a village called Red Herring, Ruddigore is definitely one of the most thrilling and complex G&S operas.

The music is wonderful. I love the change from the jolly major key of the first half to the sombre, spooky minor key of the second half which is entirely in keeping with the change of mood between the two acts. The first act is full of dancing, including a hornpipe or two, but the second half is dominated by the ghosts of Sir Ruthven's ancestors stepping down out of their picture frames.

The opera also contains some of the most fabulous songs in the G&S repetoire including "I once was a very abandoned person", "when the night wind howls" and "my eyes are fully open". My absolute favourite moment in the opera is Sir Rupert Murgatroyd mentioning the most boring place he can think of, to act as a calming prompt for Mad Margaret "Basingstoke, Margaret, Basingstoke".

The Sale Gilbert and Sullivan Society was excellent, almost professional. So, all in all, a wonderful evening's entertainment in the topsy-turvy world of Gilbert where good becomes bad, the hero becomes the villain and the virtuous maiden changes fiancé's at the drop of a hat!
Music Theatre