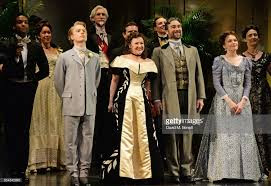 We're totally loving live theatre streaming at the moment! It is enabling us to enjoy productions which we would otherwise miss. Fellini's, in Ambleside, is showing some wonderful productions including streaming of the Oscar Wilde Season live from the Vaudeville Theatre, in London's West End.

We have already seen Lady Windermere's Fan and A Woman of No Importance, both at Fellini's. Last week we watched An Ideal Husband and, finally in October, the cherry on the top, The Importance of Being Earnest!

The cast of An Ideal Husband was superb - Freddie and Edward Fox, Nathaniel Parker, Susan Hampshire, Sally Bretton and Frances Barber. The play is often referred to as "the Rolls-Royce of British comedies" and this production was sparkling and thought-provoking. 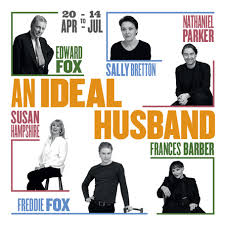 An Ideal Husband is an 1895 comedic stage play by Oscar Wilde which revolves around blackmail and political corruption, and touches on the themes of public and private honour. The action is set in London, in "the present", and takes place over the course of twenty-four hours.

Many of the themes of An Ideal Husband were influenced by the situation Oscar Wilde found himself in during the early 1890s. Stressing the need to be forgiven of past sins, and the irrationality of ruining lives of great value to society because of people's hypocritical reactions to those sins, Wilde may have been speaking to his own situation, and his own fears regarding his affair, which was still to become public.

Other themes of the play include the position of women in society. In a climactic moment Gertrude Chiltern "learns her lesson" and repeats Lord Goring's advice "A man's life is of more value than a woman's." This line drew a gasp from the audience!
Theatre